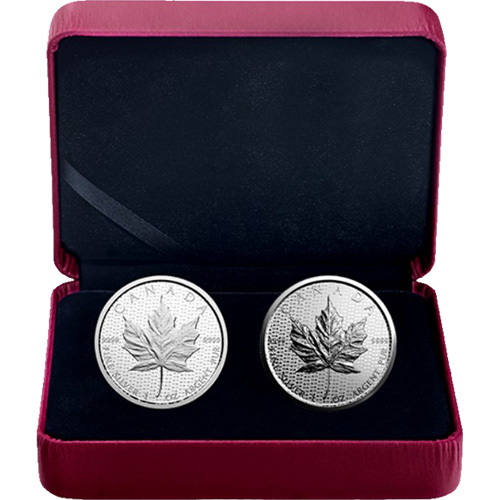 To celebrate the 30th anniversary of the Silver Canadian Maple Leaf, the world’s first-ever .9999 fine silver coin, the Royal Canadian Mint issued a stunning two-coin set in 2018. The two-coin set featured unique proof coins from the mint replicating the imagery from its popular BU Silver Maple Leafs against backgrounds you’ll only find in this set. Now, 2018 2 oz 30th Anniversary Silver Canadian Maple Leaf Two-Coin Sets are available to you for purchase online at Silver.com.

Silver Canadian Maple Leaf coins remain a major global series with mintage figures that often trail only the Silver American Eagle from the United States Mint in terms of popularity and demand. The Silver Maple Leaf is rarely issued as a proof coin, but commemorative issues do come with distinctive visuals.

Queen Elizabeth II is found on the obverse of 2018 2 oz 30th Anniversary Silver Canadian Maple Leafs. The design shows the Queen in right-profile relief as designed by Susanna Blunt in 2003. This is the fourth-generation effigy during her reign and the first portrait during her reign to lack a crown in the image.

A sugar maple leaf is depicted on the reverse side of 2018 30th Anniversary Silver Maple Leafs. The coins come with a powerful image of the sugar maple leaf and come with a laser-engraved background element. This element is actually found on both sides of the coin and offers a repeating pattern of the number “30” with a maple leaf next to it.

These 2018 2 oz 30th Anniversary Silver Canadian Maple Leaf Two-Coin Sets come with beautiful presentation packaging from the mint. This includes protective capsules for the coins, black-velvet housing inside of a maroon clamshell, and a Certificate of Authenticity from the Royal Canadian Mint. Included in this set are a 1 oz silver proof coin with frosted designs and mirrored fields, as well as a reverse-proof specimen with mirrored designs and a frosted field.

Silver.com customer service can assist you with questions at 888-989-7223. We are also available online using our live chat and email address features.