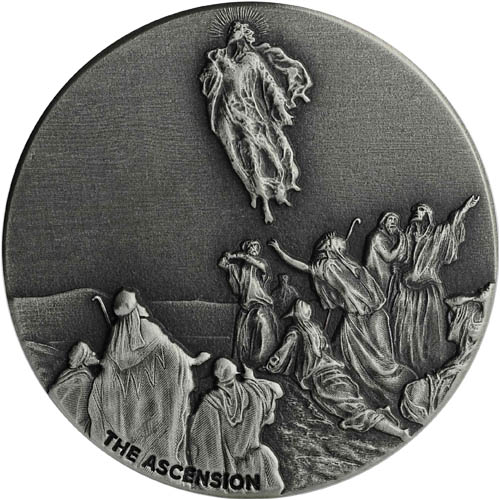 For the final issue of 2018, the Scottsdale Mint’s Biblical Silver Coin Series features one of its greatest designs. The ascension of Christ into heaven after he overcame death is one of the Bible’s greatest stories and is captured in the design on this coin which is based on Gustave Dore’s 19th-century works. Right now, 2018 2 oz Silver Ascension of Jesus Biblical Coins are available to purchase online at Silver.com.

For each of the 2018 2 oz Silver Ascension of Jesus Biblical Coins, the Scottsdale Mint offers the coins inside of brilliant display boxes that reflect the appearance of a Bible. Included with your purchase is a numbered Certificate of Authenticity that has the passage from the Bible referencing the scene from the coin’s reverse. For this COA, three lines from Acts 1:9-11 are included that state “After saying this, he was taken up into a cloud while they were watching and they could no longer see him.”

Following his death at the hands of Pontius Pilate, the Roman governor of Judea, Christ was entombed and rose from the dead on the third day. After rising from the dead and reappearing to his followers, Christ rose into heaven to be seated at this father’s right hand.

On the reverse of 2018 2 oz Silver Ascension of Jesus Biblical Coins is the depiction of Christ as he is engulfed by a bright light and risen up into the heavens above as a crowd looks on from below. This artwork comes from Gustave Dore and was part of his 19th-century collection of bible-themed works that eventually went on display in a public exhibition in London.

The obverse of 2018 Silver Ascension of Jesus Coins bears the right-profile portrait of Queen Elizabeth II. Her Majesty is featured here in the third-generation design from Raphael Maklouf. This work was created in 1984 for the Royal Mint of England and featured on British coinage until 1997.

All of the Biblical Silver Coins from the Scottsdale Mint feature an antique polish and are struck on rimless blanks for an ancient appearance. The high-relief designs create 3D brilliance for each image in the series.

If you have any questions about these silver bullion coins, please contact Silver.com. Our customer service team is available to you at 888-989-7223, online using our live chat, and via our email address.