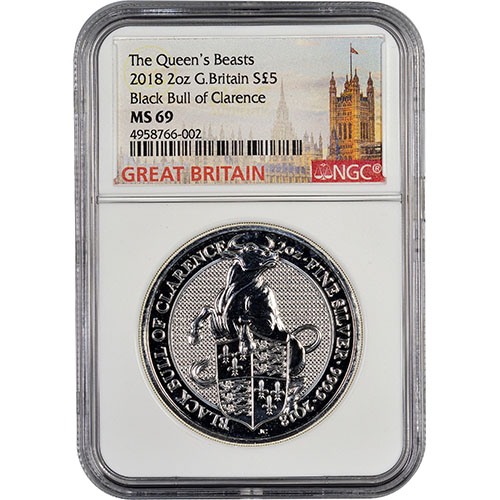 The Black Bull of Clarence is a distinctive heraldic beast in the history of the British Royal Arms. The bull isn’t the most fantastical or mythical of creatures to debut in the silver bullion series, but it is historically significant as the first beast from a monarch in the House of York. Now, 2018 2 oz Silver British Queen’s Beast Black Bull Coins are now available to you for purchase online at Silver.com.

The House of York was a cadet house of the Plantagenets that ruled England from 1461 to 1470 and again from 1471 to 1485. With the exception of two years, that entire reign by the House of York was under the control of King Edward IV. His royal shield and the Black Bull of Clarence came to the British Royal Arms during this period.

The Black Bull itself was a symbol of Roger Mortimer, the great-grandfather of Edward IV and himself a descendant of the Duke of Clarence. Edward IV’s shield was popular with other Yorkist kings, as well as monarchs in the House of Lancaster and during the House of Tudor dynasty.

On the reverse of 2018 2 oz Silver British Queen’s Beast Black Bull Coin is the Black Bull of Clarence supporting the shield of King Edward IV. The quartered shield has the Three Lions of England featured in two quadrants and the golden lilies of France in the other quadrants. Countless monarchs in this era used this shield design to mark claims to the thrones of both England and France.

These 2018 2 oz Silver British Queen’s Beast Black Bull Coins are in near-perfect condition. The NGC issues Mint State 69 certifications to coins with full, original mint luster and a maximum of two minor detracting flaws. These flaws include minuscule contact marks or hairlines only.

We encourage Silver.com customers to reach out to us with questions at 888-989-7223. You can also connect with us through our live chat and email address features.