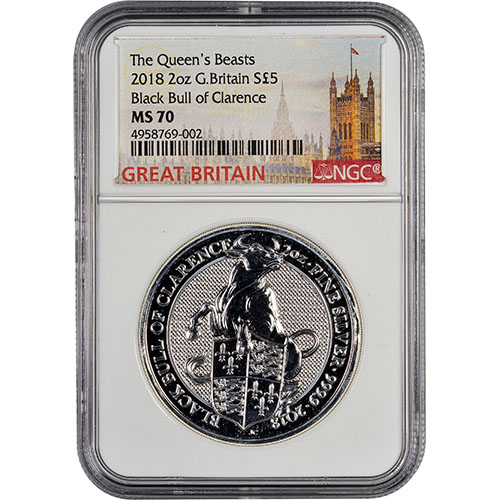 The Black Bull of Clarence is the first Yorkist beast to feature in the heraldry of the British Royal Arms and comes from King Edward IV. The House of York briefly ruled England from 1461 to 1470 and again from 1471 to 1485, with a total of three monarchs on the throne. Silver coins for sale in the Queen’s Beast Series offer the Black Bull of Clarence with Edward IV’s shield. Today, 2018 2 oz Silver British Queen’s Beast Black Bull Coins are available to you online at Silver.com in perfect condition.

King Edward IV’s reign came at a tumultuous time in British history. The Wars of the Roses pitted two cadet houses of the Plantagenets against one another for control of the crown. King Henry VI’s rule for the House of Lancaster was widely viewed as a disaster and Edward mobilized forces from the House of York to combat him, eventually winning the crown for the first time in 1461.

All 2018 2 oz Silver British Queen’s Beast Black Bull of Clarence Coins available here are perfect specimens. The NGC issues a Mint State 70 certification to coins with full, original mint luster and no detracting flaws of any kind on the design elements and surface areas.

Edward IV would be crowned King of England twice in his lifetime. After defeating Henry VI, Edward rose to the thrown as Henry went into exile in Scotland for nearly a decade. Henry VI was briefly restored in 1470, but Edward IV defeated him again in battle and had him executed in the Tower of London, establishing his Yorkist rule again in 1471.

On the reverse of 2018 2 oz Silver British Queen’s Beast Black Bull coins is the heraldic beast from Roger Mortimer, a descendant of the Duke of Clarence. The Bull supports the shield of Edward IV that features four quadrants. Two quadrants feature the Three Lions of England, while the opposing two quadrants feature the golden lilies of France to support Edward IV’s claim to the French throne.

Please feel free to reach out to Silver.com with questions. You can call us on the phone at 888-989-7223, chat with us live online, or email us.