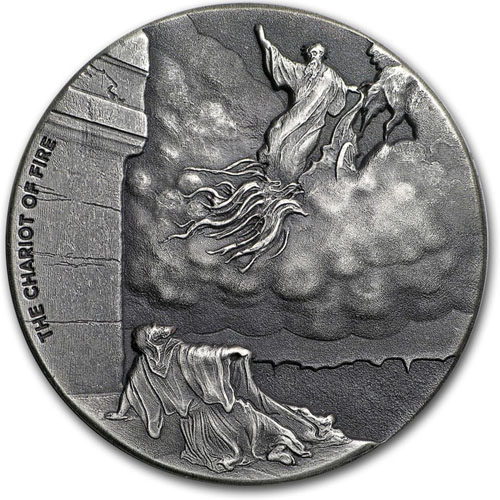 The Scottsdale Mint’s Biblical Series of silver coins is issued for the nation of Niue in the South Pacific. This brilliant collection includes a variety of designs released each year dating back to 2015 and currently features more than 20 designs as of 2018. The 2018 2 oz Silver Chariot of Fire Biblical Series Coin is currently available to you for purchase online at Silver.com.

Each of the individual coins in the Biblical Silver Series from the Scottsdale Mint is struck on a high-relief blank with an antique polish applied. The antique polish gives the coins the appearance of ancient coinage with the polish helping to highlight the more intricate details of the design elements.

Elijah is a biblical character who first appeared in the Book of Kings in the Hebrew Bible as a prophet and miracle worker. He is said to have lived in the northern kingdom of Israel around the 9th century BC. The final mentions of Elijah in the Bible focus on his ascension into heaven on a chariot of fire in 2 Kings.

On the reverse of the 2018 2 oz Silver Chariot of Fire Biblical Series coin is the image of Elijah riding on a chariot as it ascends into the clouds and heaven beyond. The chariot itself and the horses pulling it along are on fire and strike fear in the face of Elisha, a disciple of Elijah who is there to witness the ascension and who, according to 2 Kings, picks up his mantle as a prophet from that point onward.

The obverse of all 2018 Silver Chariot of Fire Biblical Series Coins features the effigy of Queen Elizabeth II. In use on British coinage as the third-generation design created by Raphael Maklouf, it was criticized at first for presenting an image of the Queen out of touch with her age at the time. Maklouf has said he wanted the design to capture the promise and hope of Britain’s Queen.

We encourage Silver.com customers to reach out to us with questions at 888-989-7223. You can also connect with us online through our live web chat and email address features. Silver prices are also conveniently listed on our website for our customers at all times!