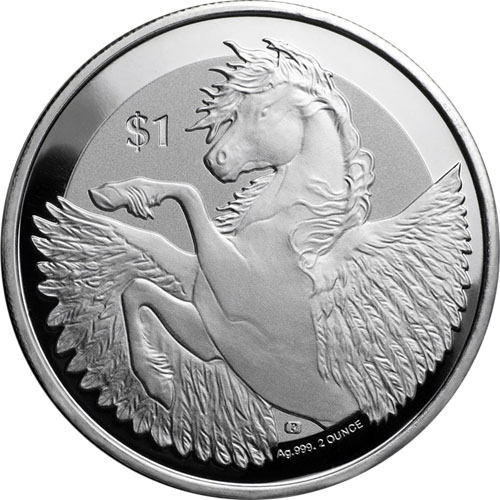 In 2016, the Pobjoy Mint of Britain introduced the first-ever silver bullion coin series for the British Virgin Islands. The overseas territory had long used horses on its coin designs over the course of time and it was a natural choice for Pobjoy to feature the famed Pegasus of Greek mythology on the new BVI Frosted Pegasus Series. Right now, 2018 2 oz Silver British Virgin Islands Frosted Pegasus Coins are available to purchase online at Silver.com.

Each 2018 2 oz Silver British Virgin Islands Frosted Pegasus Coin available to you here today ships inside of protective plastic packaging and comes in Brilliant Uncirculated condition. This is the third year of issue in the series and this release also marks the debut of a new design of the Pegasus in the collection.

All BVI Frosted Pegasus Coins from Pobjoy Mint are frosted specimens similar to a reverse proof coin. The frosted finish brings a combination of strong, frosted finishes on certain design elements and mirrored fields on other to create visual contrast in the coin’s appearance.

The Pegasus is a mythical flying horse spoken of throughout Greek mythology. It is said that the Pegasus was born out of the blood of a Gorgon, specifically the Gorgon known as Medusa. When Perseus, the son of a god and a mortal mother, killed Medusa her blood resulted in the birth of Pegasus. The gods’ gifted Perseus the horse after its birth.

On the obverse of 2018 2 oz Silver British Virgin Islands Frosted Pegasus coins is the image of Queen Elizabeth II. This is the latest design of Her Majesty and is an exclusive design for the Pobjoy Mint that is similar to Jody Clark’s Royal Mint fifth-generation design. Here, the Queen wears the Royal Diadem crown on her head and is captured in right-profile relief. Pobjoy’s exclusive design also showcases the Queen’s neckline and shoulders for a fuller portrait of Her Majesty.

The reverse of 2018 Silver BVI Frosted Pegasus Coins includes the image of the mythical flying horse. The Pegasus is depicted here with its wings spread to their fullest as it rears back on its hind legs.

If you have any questions about these coins, please contact Silver.com. Our customer service team is available to you at 888-989-7223, online using our live chat, and via our email address.