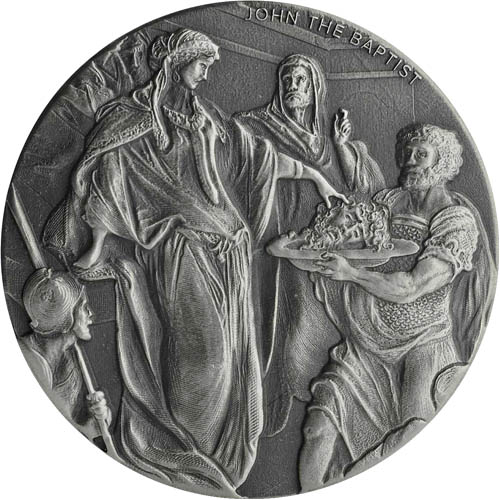 The latest issue of the Silver Biblical Coin Series from Scottsdale Mint brings a chilling vision of John the Baptist. John is one of the most revered figures in Christianity and Islam, with both religions viewing him as a prophet. It is believed by most theologians that John actually baptized Jesus. Today, 2018 2 oz Silver John the Baptist Biblical Series Coins are available to you online at Silver.com.

John the Baptist was a Jewish itinerant preacher who lived during the early decades of the 1st century AD. He is known as John the Baptist because he used the practice of baptism as a central symbol of his religious beliefs and movement, and that included the baptizing of Jesus. John’s religious beliefs eventually lead to his imprisonment and death. Though his death is the same in various gospels, the fervor for his death is different.

All 2018 2 oz Silver John the Baptist Biblical Series Coins available here today come with the Scottsdale Mint’s storybook-style display boxes that reflect the look of a Christian bible in design. Housed inside is a singular coin with an included Certificate of Authenticity that bears the same serial number found etched on the outer edge of the coins.

The reverse face of the Silver John the Baptist Biblical Series Coin features the image of John the Baptist’s head on a tray, carried to a mother by her little girl. The gospel of Mark states that Herod ordered John beheaded with reluctance, while the gospel of Matthew describes Herod as wanting John beheaded. In Matthew’s account, a little girl prods on Herod with her mother’s support, and that girl eventually delivers the head to her mother. This scene is depicted on the reverse of these coins.

On the obverse of 2018 2 oz Silver John the Baptist Biblical Series Coins is the image of Queen Elizabeth II. This beautiful third-generation design was created by Raphael Maklouf and used on British coinage from 1985 to 1997.

Please feel free to reach out to Silver.com with your questions about this silver for sale. You can call us at 888-989-7223, chat with us live online, or simply send us an email with your inquiries.