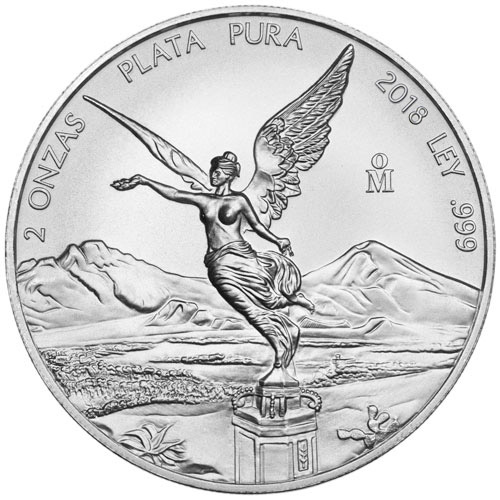 Silver Mexican Libertads are the official silver bullion coins of Mexico. Introduced in 1982, only the 1 oz coin in the collection has been offered in every year since that time. However, in the 1990s the Mexican Mint introduced more options in two different release cycles, bringing fractional-weight options and larger-than-1-oz options to the collection. The 2018 2 oz Silver Mexican Libertad Coin is available to you for purchase online at Silver.com.

The Mexican Mint offers the Libertad coin series in both silver and gold options. Both metals have product selection that ranges from fractional weights up to 1 oz or larger coins, though the gold series does not have options above 1 oz in the bullion range. The design of the Libertad obverse is based upon the gold Centenario coin.

Released in 1921, the gold Centenario was struck by the Mexican Mint in honor of the nation’s centennial of independence. That coin design used the image of Winged Victory as inspiration. At the same time, Mexico erected a statue of Winged Victory in the center of Mexico City. Her figure is found atop the Mexican Independence Victory Column, where stands at a height of 22 feet.

On the obverse of the 2018 2 oz Silver Mexican Libertad is the image of Winged Victory. She is captured in a slight left-profile relief, with her right hand outstretched, her wings spread, and her left hand behind her holding the broken chains that symbolized Spanish colonial control. In the background are the peaks of Popocatepetl and Izztacihuatl, along with engravings of the weight, purity, metal content, and Mexican Mint mark.

The reverse of the 2 oz Silver Mexican Libertad coins features the coat of arms in the center. Mexico’s modern version captures the bald eagle locked in battle with a rattlesnake on the arm of a cactus, while a wreath is below and “Estados Unidos Mexicanos” is engraved above. There are also 10 historic versions of the coat of arms surrounding the design.

The 2018 2 oz Silver Mexican Libertad you purchase here today is in BU condition. Coins in this condition have no signs of wear and tear, but could feature minor flaws ranging from breaks in the luster and spotted surfaces to contact marks.

We encourage Silver.com customers to ask us questions when buying silver. Our team is available at 888-989-7223, online through our live chat, and via our email address.