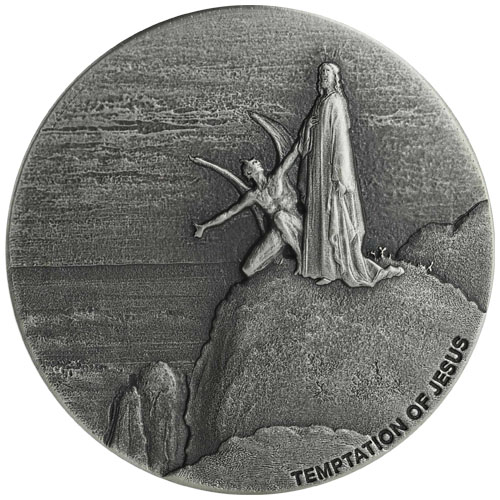 As told in the gospels of Matthew, Mark, and Luke, Jesus set out into the Judean Desert to fast for 40 days and nights following his baptism at the hands of John the Baptist. It was during this time that Jesus’ determination and faith were tested to the extreme. Satan appeared when Jesus was at his weakest and offered him the world if only he’d kneel to the devil. Jesus refused and the scene’s climactic moment is captured on the latest coin in the Biblical Series of silver for sale from the Scottsdale Mint. Right now, 2018 2 oz Silver Temptation of Jesus Biblical Series Coins are available to purchase online at Silver.com.

Each 2018 2 oz Silver Temptation of Jesus Biblical Series Coin is available to you today inside of a stunning bible-themed commemorative box. The coins in this series come with a numbered Certificate of Authenticity that includes a bible chapter and verse reflecting the moment depicted in the design. In the case of this coin, the selected verse is from Matthew 4:8-11.

The coins of the Biblical Series include a unique serial number etched onto the edge of the coin that is also reflected on the included Certificate of Authenticity. The coins in this series are also antique and feature the Scottsdale Mint’s antique polish for a rustic, ancient visual appeal.

On the reverse of 2018 2 oz Silver Temptation of Jesus Biblical Series Coins, you’ll find the image of Jesus standing on a mountain perch with Satan offering him all the kingdoms of the world and all the glory if he will only kneel before the devil. This artwork comes from Gustave Dore’s 1866 illustrations of the Bible.

The obverse of 2018 Silver Temptation of Jesus Biblical Series Coins bears the right-profile portrait of Queen Elizabeth II. Used by the Royal Mint of England from 1984 to 1997, this third-generation design was created by Raphael Maklouf.

If you have any questions, we encourage you to reach out to us at Silver.com. Our customer service team is available to you at 888-989-7223, online using our live chat service, and via our email address.