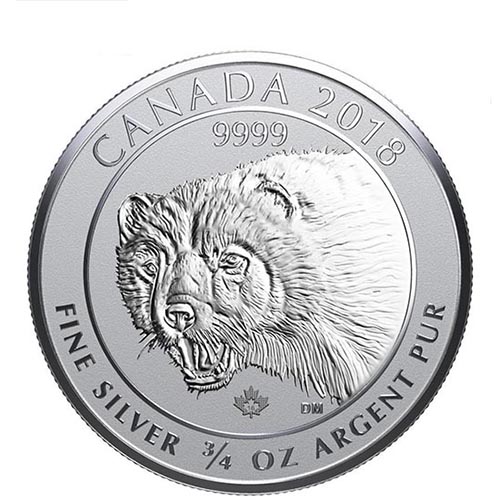 There’s a new silver coin for sale from the Royal Canadian Mint, and it represents the second release in a popular new reverse proof collection from the sovereign mint of Canada. The Animal Portrait Series is available in gold and silver, featuring a reverse proof strike and a new animal native to North America on the reverse. The 2018 ¾ oz Silver Canadian Wolverine Reverse Proof Coin is now available for purchase online at Silver.com.

The wolverine is a tough, aggressive member of the weasel family. Long believed to be solitary, and particularly intolerant in the male population, the wolverine has actually been found to live within a complex family structure. Male wolverines have been spotted visiting their own young to play with and care for them in the absence of the mom. Despite being territorial creatures, the male wolverine has also been documented allowing its young to live in its territory until adulthood to learn independent survival skills.

In the Animal Portrait Series, the Royal Canadian Mint features a new species on the reverse with each release. The wolverine is the second of these releases, with both designs so far created by Denis Mayer Jr. The coins even feature the mint’s latest security feature, the laser micro-engraved maple leaf privy mark with textured finish and a small “18” in the center visible under magnification.

On the reverse of each 2018 ¾ oz Silver Canadian Wolverine Reverse Proof Coin is a wolverine. These creatures are exceptionally strong and violent when need be, with a powerful jaw and strong teeth capable of breaking bones and chewing through frozen meat. The wolverine’s fur stands out, with dark brown base fur and a white line that diverges at the base of its thick neck and converges again at the base of the tail.

The obverse of the 2018 Silver Canadian Wolverine Reverse Proof coins features Queen Elizabeth II’s effigy. Her Majesty is captured here in right-profile relief in a fourth-generation depiction from Susanna Blunt.

Each coin in the Animal Portrait Series is a reverse proof specimen. Coins of this type have deeply-mirrored, clear design aspects on a background field that is strong and frosted, creating stark contrast between the two fields.