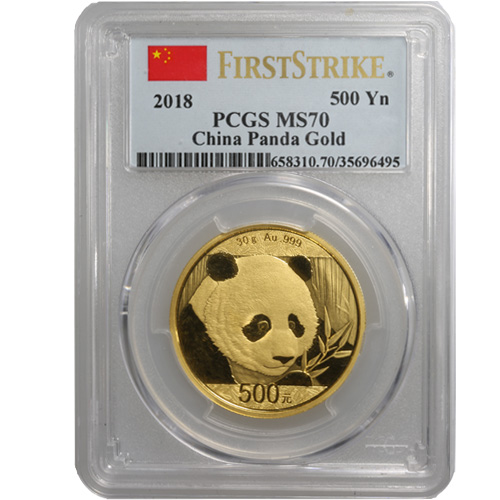 The Gold Pandas from the Chinese Mint are among the most prominent gold coins for sale in the world today. The series features five coin weights in total as of 1983, having debuted in 1982 with four weights. As of 2016, the coins are available in Grams rather than Troy oz. Now, 2018 30 Gram Gold Chinese Pandas are available to you online at Silver.com in perfect condition.

In 2016, the Chinese Mint issued all five of the gold coins in the Chinese Panda Series in Grams instead of Troy ounces. The 1 oz gold coin became the 30 Gram gold coin, with the other coins becoming 15 Gram, 8 Gram, 3 Gram, and 1 Gram gold coins. The resulting change also brought some minuscule alterations to the physical appearance of the coins.

For the former 1 Troy ounce gold coin, the 30 Gram gold coin had a slightly smaller diameter of 32 MM. That was down from just 32.05 MM on the 1 oz coin with no changes to the thickness of the blank. The 1 Troy ounce gold weighed in at 31.103 Grams, making the 30 Gram Gold Chinese Panda Coin lighter as well.

The obverse face of 2018 30 Gram Gold Chinese Pandas bears the image of the exterior structure of the Hall of Prayer for Abundant Harvests. This building is the largest and primary structure in the Temple of Heaven Complex. The site is a Taoist religious complex that was built between 1406 and 1420.

On the reverse side of the 2018 30 Gram Gold Chinese Pandas is a depiction of the Giant Panda. This year’s design is exclusive to 2018 and comes with the front-facing view of a Giant Panda’s face as its looks at some bamboo leaves in its paw. Bamboo makes up nearly 95% of the diet of the Giant Panda species.

These 2018 30 Gram Gold Chinese Pandas are available here in protective plastic slabs with a perfect Mint State 70 certification from the PCGS. Coins in this condition showcase full, original mint luster and have no detracting flaws of any kind on the design elements or background fields.

Silver.com customer service is available to assist you at 888-989-7223. We are also available online through our live chat and web address features.