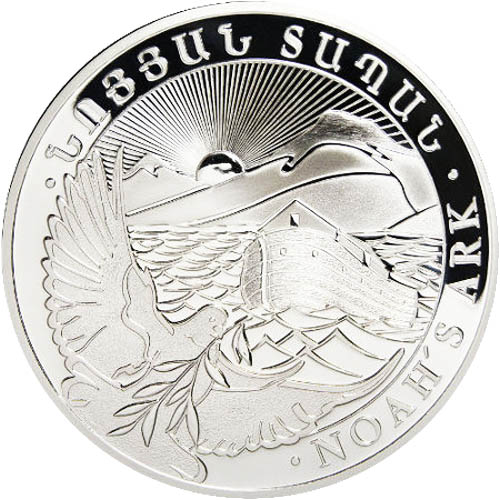 Geiger Edelmetalle originally introduced the Silver Armenian Noah’s Ark coins in 2011 with a 1 oz silver, 1/2 oz silver, and 1/4 oz silver coin available. It took just one year for the series to more than double as the 2012 issue of the coins included four new weights, each one greater than 1 oz silver in weight.

The obverse side of 2018 5 Kilo Silver Armenian Noah’s Ark Coins comes with a depiction of the national coat of arms for the Republic of Armenia. The national emblem features a quartered shield with lions and eagles in the four quadrants in different reliefs. At the center is another shield with Noah’s Ark resting on Mount Ararat’s peak. The shield is supported on the sides by a Lion, left, and Eagle, right.

On the reverse face of 2018 5 Kilo Armenian Noah’s Ark Coins is an artistic rendition of Noah’s ark. Designed by Eduard Kurghinyan, this image captures the ark after the rains of ended as the floodwaters begin to subside. A dove flies into view with an olive branch in its beak as the sun rises of Mount Ararat in the distance.

These 2018 5 Kilo Silver Armenian Noah’s Ark Coins are available to you in Brilliant Uncirculated condition. Each one is individually packaged inside of a wooden box for display and shipping.

Silver.com customer service is available at 888-989-7223. Alternatively, we are available online through our live chat and email address features.