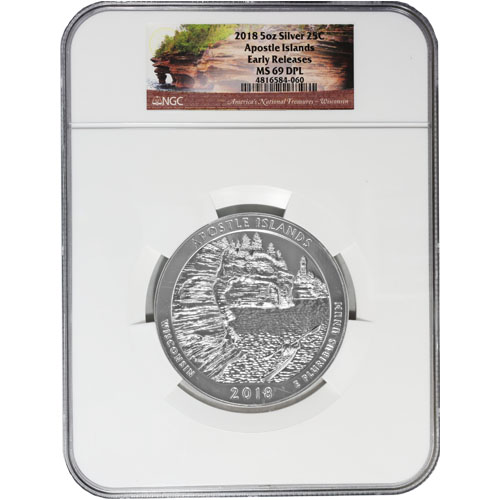 The 2018 release of the America the Beautiful 5 oz silver coins was one of the more unique in the series when viewed through the lens of the representative sites and the regions of the nation covered. All ATB Coins were issued by the United States Mint in order of their recognition by the federal government as protected sites, with the oldest sites featured first in the series and the most recently added featured at the end of the collection. Today, 2018 5 oz Silver ATB Apostle Islands National Lakeshore Coins are available to you online at Silver.com in near-perfect condition.

All five of the 2018 Silver ATB Coins issued by the United States Mint celebrated protected waterways across the United States. In total, the designs honored Block Island’s National Wildlife Refuge, the waterways of Voyageurs National Park, two National Lakeshores, and a National Seashore. Another particularly unique facet of the 2018 release was the cluster of Great Lakes States, with Minnesota, Wisconsin, and Michigan featured in the release.

2018 5 oz Silver ATB Apostle Islands National Lakeshore Coins available in this product listing come with Mint State 69 certifications. An MS69 coin has full, original mint luster with no more than two minor detracting flaws. Acceptable flaws at this grade level include only minuscule contact marks or hairlines that must be located outside the primary focal points of the coins.

Also featured with these coins are designations of DPL and ER. The former stands for deeply-mirrored, proof-like, and points to the unique visuals present on these bullion versions of the 2018 ATB Apostle Islands release. The latter designation stands for Early Release and indicates the coins were received within 30 days of the initial release date to be graded by the NGC.

President George Washington features in left-profile relief on the obverse of 2018 5 oz Silver ATB Apostle Islands National Lakeshore Coins. The design was created in 1932 by John Flanagan for use on the circulation quarter.

A kayaker is depicted on the reverse of 2018 5 oz Silver ATB Apostle Islands Coins. This design shows the kayaker on the relatively calm waters of Lake Superior as the individual rows passed the sea caves along Devils Island.

Please feel free to contact Silver.com with any questions when you buy silver. We are available on the phone at 888-989-7223, online through our live chat, and using our email address.