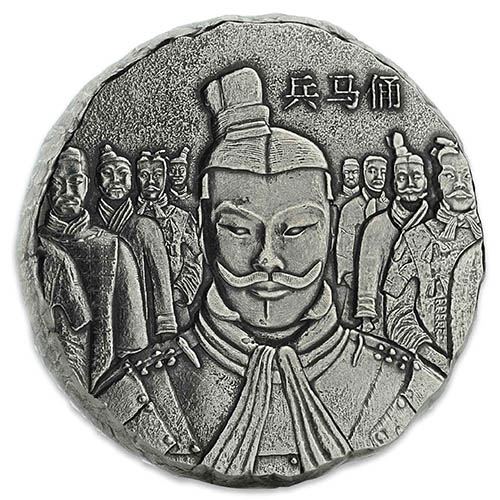 The 8,000 clay warriors of the Terracotta Army were constructed to guard their emperor in the afterlife and completed more than 2,000 years ago. A UNESCO World Heritage Site, the Terracotta Army was discovered in 1974 by farmers and has been meticulously excavated in the decades since. Now, they appear on a beautiful antique coin from Scottsdale Mint. Today, 2018 5 oz Silver Fiji Terracotta Army Coins are available to you online at Silver.com.

Uncovered in 1974, the warriors of the Terracotta Army are entombed in a large burial complex designed to guard the spirit of their master in the afterlife. Qin Shi Huang was the founder of the Qin Dynasty and ruled as the first emperor of China from 220 BC to 210 BC. More than 70 years after his death, the construction of the army he commissioned to guard his tomb was completed.

All 2018 5 oz Silver Fiji Terracotta Army Coins in this listing are available inside of individual cotton bags with drawstring tops. The included Certificate of Authenticity that comes with your coin includes an individual serial number.

On the reverse of 2018 Silver Fiji Terracotta Army Coins is the image of a number of Emperor Qin Shi Huang’s soldiers dutifully standing in a row to guard their emperor as he crossed into the afterlife. The collection of soldiers stand in a tight formation ready to defend the emperor and includes life-size replications of soldiers, horses, and chariots, as well as the weapons and armor used in battle.

The obverse of 2018 5 oz Silver Fiji Terracotta Army Coins includes the coat of arms for Fiji. The seal features a shield supported on either side by native Fijians and bears symbols on it that reflect the seafaring lifestyle of ancient Fijians.

Scottsdale Mint is a private American minting facility in the US state of Arizona. Located in the city of Scottsdale, the mint issues these coins with an antique polish and ruptured edges that mimic the appearance of stone segments chiseled from a larger slab. The mint issues the coins in collaboration with the Reserve Bank of Fiji.

Please feel free to reach out to Silver.com with your questions about silver for sale. You can call us on the phone at 888-989-7223, chat with us live online, or simply send us an email with your inquiries.