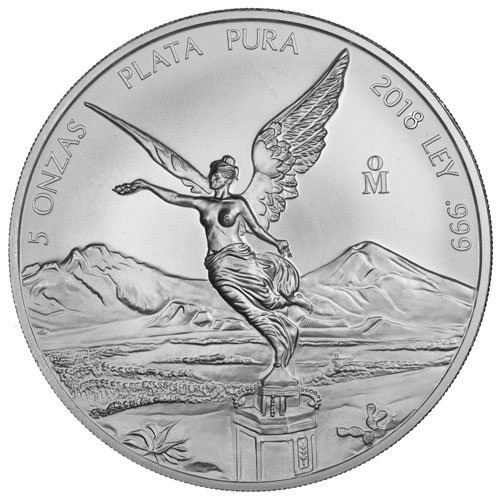 The official silver bullion coin of the nation of Mexico is the Libertad coin, which is available in both silver and gold. The silver coin in the series is one of few major bullion programs that offers investors various options when buying silver. Among those options is the 5 oz Silver Libertad, which is the largest weight in the silver bullion series. Today, 2018 5 oz Silver Mexican Libertad Coins are available to you online at Silver.com.

All 2018 5 oz Silver Mexican Libertad Coins in this Silver.com listing are available to you in BU condition. Coins in BU condition showcase no wear and tear from handling, but there is the possibility of minor flaws due to the production process. Among those flaws, you’re likely to see only breaks in the luster, spotted surfaces, or contact marks.

On the obverse of all Silver Mexican Libertad Coins is the image of Winged Victory, but she is not alone in this design. Winged Victory was a symbol of resistance to the Mexican people during their revolution against Spain. Her image appeared first on the gold Centenario in 1921, as well as on the Mexican Victory Independence Column in Mexico City. She is accompanied by the twin volcanic peaks in the background named Popocatepetl and Izztacihuatl after a pair of Aztec lovers.

In Mexico City, the Mexican Mint was opened in 1535 by Spanish conquistadors who wanted to refine silver and gold for shipment back to Europe. The Mexican Mint today coins bullion and circulation currency for the federal government of Mexico.