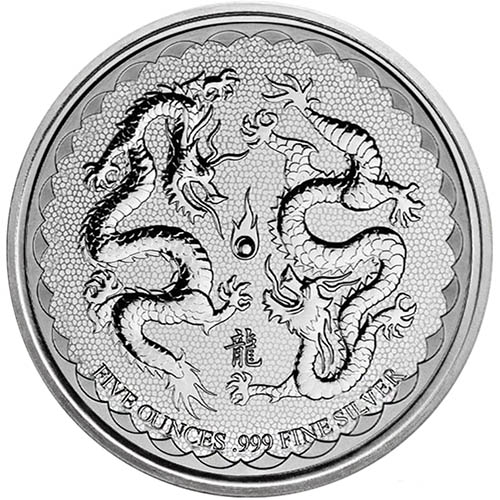 The dragon is an immensely important symbol to the people of China, and has been for thousands of years. Dating back as far as the 5th millennium BC, the dragon was viewed as critical to the culture of China. Today, 2018 5 oz Silver Niue Double Dragon Coins are available to you online at Silver.com.

In ancient Chinese societies, the people themselves believed they had descended from the dragons because the dragon was imagined as a reptile whose form was representative of the evolution from the ancestors and the qi energy. Since roughly 4700 BC, the dragon has been an omnipresent creature in religion, culture, and mythology of the Chinese people.

The 2018 Silver Niue Double Dragon Coin brings some of the most revered symbolism from Chinese culture to life on a two-coin offering from the New Zealand Mint for the small nation of Niue. The coins available in this release include this 5 oz version, as well as a 1 oz silver coin. Each coin features a brilliant reverse-scalloped design element that frames the images on both the obverse and reverse sides.

On the obverse of the Silver Niue Double Dragon you’ll find Queen Elizabeth II. Her Majesty is featured here in a fourth-generation portrait by Ian Rank-Broadley, and is accompanied by engravings of “Elizabeth II,” “Niue,” “Ten Dollars,” and “2018.”

The reverse of the 2018 5 oz Silver Niue Double Dragon Coins includes the new Double Dragon design. Here, two dragons are shown circling a flaming pearl in the center of the design. In Chinese culture, the pearl signifies energy, wisdom, prosperity, and immortality. This side includes engravings of “Five Ounces .999 Fine Silver.”

Please feel free to reach out to Silver.com if you have questions about buying silver. We’re available to you on the phone at 888-989-7223, online using our live chat, and via our email address.