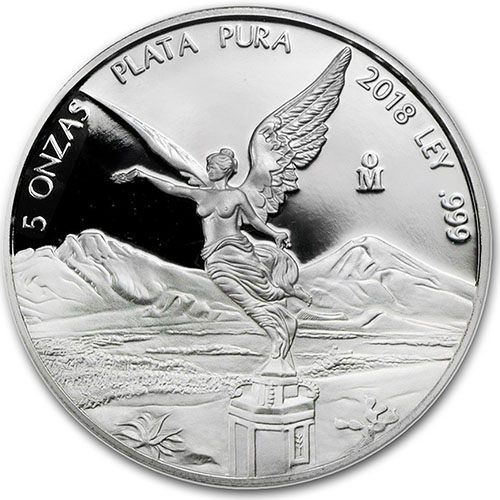 The Proof Silver Libertad is the official collectible coin from the Mexican Mint’s silver bullion collection. The Silver Libertad coin features images of Winged Victory, the nation’s coat of arms, and the volcanic peaks named for a pair of lovers etched in the pre-Columbian history of Central America. The 2018 5 oz Proof Silver Mexican Libertad Coin is currently available to you for purchase online at Silver.com.

In 1991, the Mexican Mint began to expand the options for those collecting silver in the Libertad Series. The mint first added four fractional-weight coins ranging from 1/20 oz and 1/10 oz up to ¼ oz and ½ oz. From 1992 to 1995, no further additions were made to the collection. In 1996, a final expansion occurred with the introduction of a 2 oz coin along with these 5 oz Proof Silver Libertads.

On the reverse of the 2018 5 oz Proof Silver Mexican Libertad Coin is the design of Winged Victory. Her figure is symbolic of freedom and self-governance to the Mexican people. Part of Mexico’s culture dating back to the 19th century, today her figure stands tall atop the Mexican Independence Victory Column in Mexico City.

The obverse of the 5 oz Proof Silver Libertad coins includes the modern coat of arms for the nation in the center of the design field. Surrounded by the name of the nation and a wreath, you’ll also find the outer design field occupied by 10 different historic depictions of the same design.