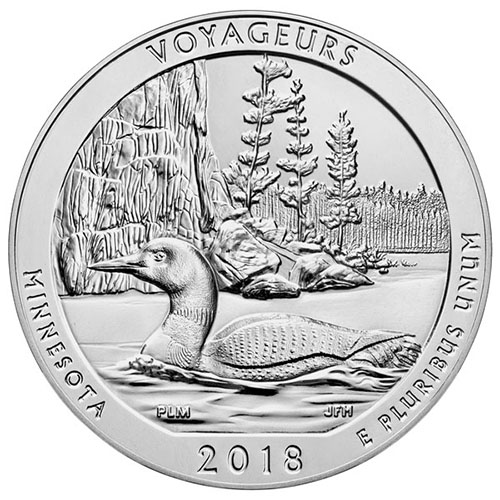 The 2018 America the Beautiful series of silver bullion coins hits its midway release with the Voyageurs National Park coin representing the state of Minnesota. The 2018 coins have a heavy focus on the Great Lakes, in particular, the states that share coastline along Lake Superior. Right now, 2018 5 oz Silver ATB Voyageurs National Park Coins are available to purchase online at Silver.com.

Each 2018 5 oz Silver ATB Voyageurs National Park Coin available to you here today is the third release in the 2018 schedule of five designs available from the US Mint. The coins are available to you in BU condition with individual capsules, mint-issued tubes of 10 coins, or monster boxes of 100 coins in which each coin is not encapsulated.

The first European settlers to travel through the state of Minnesota made their way along the waterways of northern Minnesota near its border with Canada and the shores of Lake Superior. Voyageurs National Park is named for those “voyageurs,” the first of whom were French-Canadian fur traders.

On the reverse of the 2018 5 oz Silver ATB Voyageurs National Park Coin are scenes emblematic of the beauty of northern Minnesota. The state bird, a loon, dominates the foreground as it swims through the waters of the park with thick forests and rocky outcrops along the shore visible.

Voyageurs National Park is popular with outdoor enthusiasts in Minnesota on a year-round basis. In the summer months, it is a top destination for fishermen, canoeists, and kayakers, while the winter months give way to visitors on snowmobile, skis, and snowshoes.

The obverse of all Silver ATB Coins includes the left-profile portrait of President George Washington. The nation’s first Commander-in-Chief is shown in a 1932 design from John Flanagan that was placed on the circulation quarter that same year to mark the 200th anniversary of Washington’s birth.

If you have any questions, please don’t hesitate to ask. Silver.com customer service is available to you on the phone at 888-989-7223, online using our live chat, and via our email address.