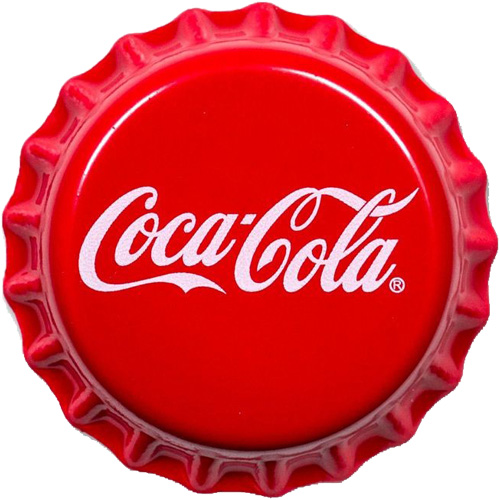 Coca-Cola was developed in 1886 by former Confederate Army Colonel John Pemberton. A pharmacist in his life after the Civil War, Pemberton created Coca-Cola while trying to find a substitute for the problematic drug morphine. Countless soldiers on both sides of the conflict often saw gruesome injuries and long-standing pain treated with morphine, a highly-addictive drug.

Pemberton’s original creation was meant to help wean people off of morphine. An interesting note that is often pointed out in the history of Coca-Cola is that Pemberton’s original recipe, which used the African kola nut for a caffeine source, actually included cocaine in its mixture. In fact, the trace amounts of cocaine remained in the recipe through 1909.

The obverse side of 2018 6 Gram Silver Fiji Coca-Cola Bottle Cap Coins features a replication of a Coca-Cola bottle cap. This red field of the coin features the iconic script text of “Coca-Cola” in white lettering. While Coke itself was designed by John Pemberton, the Coca-Cola Company and its recognizable white script brand name were both created by Asa Griggs Candler, the man who bought the formula for Coke from Pemberton and established the company in 1892. Coke still uses that same design today in 2020 without change.

On the reverse face of the 2018 6 Gram Silver Fiji Coca-Cola Bottle Cap Coin, you will find the coat of arms for Fiji. The image of the Fijian coat of arms includes a canoe with Outrigger above the shield with native Fijian figures supporting the shield from the sides. The four quadrants of the shield include a dove and symbols of native agriculture in Fiji.

These 2018 6 Gram Silver Fiji Coca-Cola Bottle Cap Coins are individually packaged inside of red, collectible Coca-Cola tins. The tine has its own Coke cap as a lid with a red Coca-Cola box to house the coin and tin. Each one comes with a Certificate of Authenticity as well.

Silver.com customer service is available to assist you on the phone at 888-989-7223 with any questions. We are also available to you on the web through our live chat and email address.