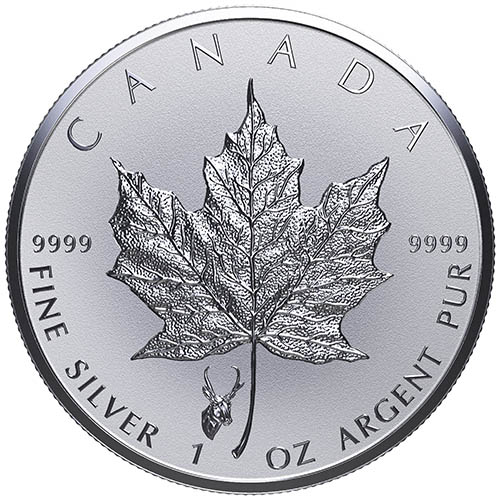 The Wild Canada Series of silver coins for sale from the Royal Canadian Mint revives one of the most popular design collections the mint has released in the 2010s. The Canadian Wildlife Series creatures appear in the Wild Canada Series as privy marks on the reverse of Silver Canadian Maple Leaf Coins. Today, 2018 1 oz Antelope Privy Silver Canadian Maple Leaf Reverse Proof Coins are available to you online at Silver.com.

The Wild Canada Series of coins from RCM are all issued as reverse proof specimens. As the name suggests, the visual elements of the coin are the opposite of a standard proof coin. The design sets are deeply-mirrored and clear, while the background field has a beautiful frosted, matte appearance.

On the obverse of 2018 Antelope Privy Silver Canadian Maple Leaf Coins is the effigy of Queen Elizabeth II. Traditionally captured in right-profile relief, this bust of the Queen was created in 2003 by Susanna Blunt and became the first monarch’s portrait on Canadian coinage since that of her father, King George VI, to feature a monarch without the crown.

The reverse of 2018 1 oz Antelope Privy Silver Canadian Maple Leaf Coins includes the famed sugar maple leaf design which appears on all coins in the series. The antelope privy mark is found on this side of the coin as a nod to the Canadian Wildlife Series. The antelope release was the fourth coin in that collection and first of 2013, and the antelope privy appears as the fourth privy mark coin in the Wild Canada Series as well.

Please feel free to reach out to Silver.com with your questions at 888-989-7223. You can also connect with us live online or simply send us an email with your inquiries.