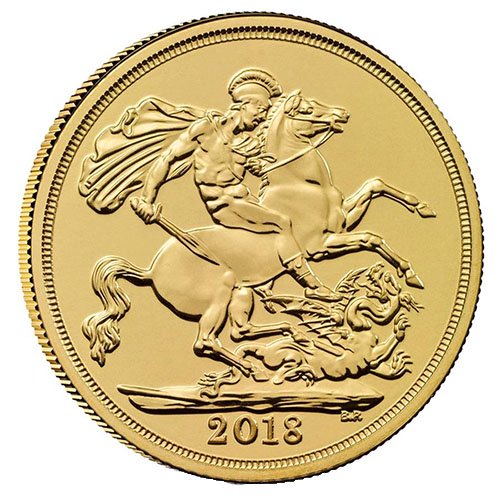 As early as 1489 during the reign of King Henry VII, the English crown was issuing gold coins that were known as sovereigns. These coins were so-named because on the obverse face as the image of the reigning monarch. For two centuries, Kings and Queens of England issued the coins, and starting in 1817 the gold sovereign returned and has been issued ever since. Today, 2018 Gold Great Britain Sovereigns are available to you online at Silver.com.

The history of the Great Britain gold sovereign coins for sale is a truly intriguing tale. Henry VII’s first issuance of sovereigns in the late 15th century was never intended for circulation. Due to the immense value of the gold in the coins, it is believed they served merely as presentation pieces to dignitaries visiting the king.

During the rule of King James I, who united the crowns of England and Scotland, the gold sovereign was changed to a coin with a value of twenty shillings. By 1717, the coins had a value set at 21 shillings and had even ceased to be known as sovereigns. By 1817 though, the Great Recoinage of 1816 had set into motion steps that rebranded the coins again as sovereigns with a 1 pound value.

On the obverse and reverse side of gold sovereigns since the reemergence of the coins in 1817 have been the same two image concepts. On the one side is St. George locked in battle with a dragon, an iconic symbol in Britain. On the other is the portrait of the reigning monarch of England.

The obverse of these 2018 Gold Great Britain Sovereigns features the right-profile portrait of Queen Elizabeth II. Her Majesty’s effigy here is a fifth-generation issuance, with 2018 marking her 65th year since coronation as Queen of England. The portrait is from Jody Clark of the Royal Mint and was created in 2017.

On the reverse of the coin is Benedetto Pistrucci’s design of St. George battling the dragon. Designed in 1817 and featured on sovereigns since that time, St. George is featured on horseback as he tramples the dragon while wielding a short sword in his right hand.

Please feel free to reach out to Silver.com if you have questions. Our customer service team is available at 888-989-7223, online using our live chat, and via our email address as well.