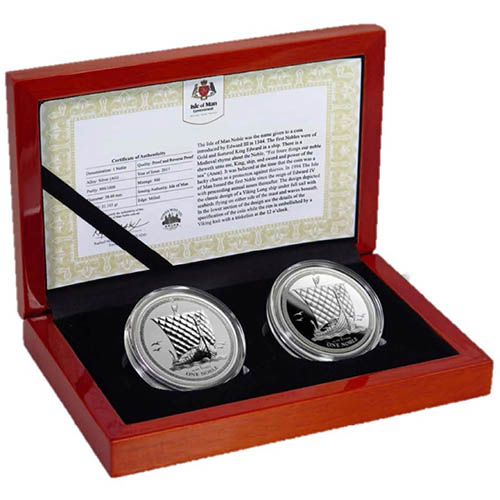 Great Britain and the crown dependencies of the United Kingdom have a rich history of coinage. The kingdom has been issuing gold coins for more than one thousand years, and among its many designs are some classics which have been revived on modern coinage. One of the first widespread coin designs in Britain was the Gold Noble. Today, the gold noble concept is revived on the 2018 Silver Isle of Man Noble 2-Coin Set, available to you at Silver.com.

The Gold Noble coin was first issued in the Kingdom of England by King Edward III. The Gold Noble was the first widely circulated and mass-produced gold coin in England. The initial design featured an image of the king sailing in a ship and wielding a sword in one hand while defending himself with a shield in the other. These Isle of Man Noble Coins offer a specialized twist on that design.

All of the 2018 Silver Isle of Man Noble Coins in this two-coin set feature individual capsules to protect the coins and come with a wooden display box to house the specimens. One of the silver coins is what the mint calls a Premium Uncirculated coin. It features a proof, mirrored background with a matte, frosted finish on the design elements. The other coin is a reverse proof, which features strong, frosted background fields and mirrored design elements.

On the reverse of the 2018 Silver Isle of Man Noble 2-Coin Set specimens, you’ll find the image of a sailing boat. However, the choice of a Viking long boat reflects Norse control of the island which occurred from the 9th century until 1399 when it came under the control of the feudal lordship of the English Crown.

The obverse side of the 2018 Silver Isle of Man Noble coins features Queen Elizabeth II. Today, the Isle of Man is a crown dependency and the ruling monarch of England is known, whether male or female, as the Lord of Mann. This design comes from Jody Clark.