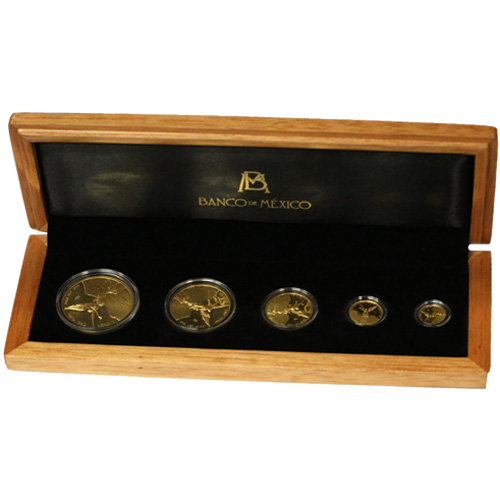 The Gold Mexican Libertad coin is the modern gold bullion coin of the nation of Mexico. Based upon the designs of the famed gold Centenario coin from the 20th century, the Gold Libertads were introduced in both bullion and proof starting in 1981 and 1983, respectively. Right now, 2018 Proof Gold Mexican Libertad 5-Coin Sets are available to purchase online at Silver.com.

Each of the 2018 Proof Gold Mexican Libertad 5-Coin sets offered in this limited-issue release ships to you housed in a high-quality wooden display case. The wooden cases have a black interior lining that includes the name “Banco de Mexico” on the inside of the lid and sits all five of the 2018 Proof Gold Mexican Libertad coins. Included with your purchase is a Certificate of Authenticity.

Today, the Mexican Mint offers the Proof Gold Mexican Libertad coins in five total weights that include 1 oz, ½ oz, ¼ oz, 1/10 oz, and 1/20 oz. Each year, these coins have extremely low mintage figures, with the highest year ever in 2016 at 2,100 coins for each of the five weights.

On the obverse of all Proof Gold Mexican Libertad coins you’ll find Winged Victory. A symbol of Mexican victory in the war of independence against Spain, Winged Victory appears in real life atop the Mexican Independence Victory Column in Mexico City, which was erected in 1921 to mark 100 years of freedom.

If you have any questions, please don’t hesitate to ask. You can connect with Silver.com customer service at 888-989-7223, online using our live chat, and via our email address.