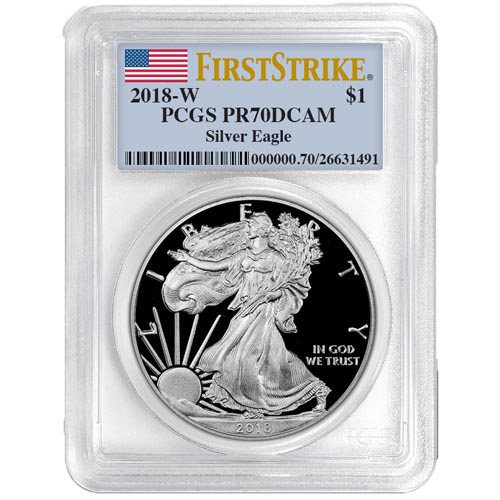 The Silver American Eagle collection from the United States Mint is the best-selling 1 oz silver coin in the catalog. Available annually in three different versions, this coin features images of Liberty and the American bald eagle on its obverse and reverse sides. Today, 2018 Proof Silver American Eagle Coins are available to you online at Silver.com in perfect condition!

Though production generally fell through the late 1980s and 1990s, the Proof Silver Eagle has risen in demand at various points in recent history to near-record levels. For the 20th anniversary of the series, the 2006 coin had a mintage of 1.092 million. Mintage has neared one million coins three other times in recent history: 2011, 2013, and 2014.

All 2018 Proof Silver American Eagle coins are available to you today in perfect condition. The PCGS grades a coin PR70 when it features full, original mint luster and bears no detracting flaws of any kind. First Strike is a designation for coins that arrive for certification within the first 30 days of the release date set by the United States Mint for its 2018 Silver Eagles.

Deep-cameo, or DCAM, coins have a stunning combination of visual features. The design elements have strong, frosted finishes that combine impressively with the deeply-mirrored, clear background field.

Please don’t hesitate to reach out to Silver.com if you have questions. Our customer service team is available to you on the phone at 888-989-7223, online using our live chat, and through our email address.