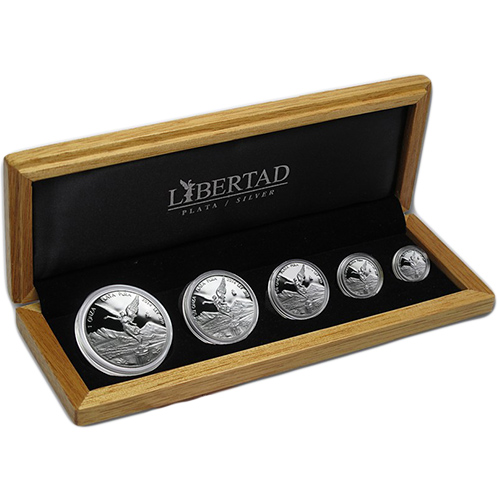 One of the most coveted proof coins issued each year globally is the Silver Mexican Libertad. The official bullion coin of Mexico, the Silver Libertads debuted as bullion coins in 1982 and have since grown to include five different weights in .999 fine silver content, with both bullion and proof versions of the coin available to purchase. Right now, 2018 Proof Silver Mexican Libertad 5 Coin Sets are available to purchase online at Silver.com.

Each of the 2018 Proof Silver Mexican Libertad 5-Coin Sets available here for you to purchase today arrive inside of beautiful wooden display boxes that perfectly house and showcase your coins. The sets also include a Certificate of Authenticity verifying the quality of the individual coins.

The Silver Mexican Libertad coin features a design originally found on the gold Centenario. The Centenario was issued by the Mexican Mint in 1921 to commemorate 100 years of Mexican independence. At the same time, the nation erected the Mexican Independence Victory Column in the center of its capital, Mexico City, to mark the occasion. Topping that column was the image of Winged Victory, which appeared on the Centenario and now appears on the Silver Libertad coins as well.

On the obverse of each 2018 Proof Silver Libertad Coin in this beautiful five-coin set is the image of Winged Victory. She is featured on the foreground holding a wreath crown in her right hand and broken chains in her left hand. The background contains two large, volcanic mountain peaks known as Popocatepetl and Iztaccihuatl. These proof coins have brilliant, contrasting fields of mirrored, clear backgrounds and strong, frosted design elements.

The reverse of all 2018 Proof Silver Mexican Libertad Coins in this five-coin set bear the coat of arms for the nation of Mexico. However, the 1 oz coin is the only one to feature the coat of arms currently used by the nation along with 10 historic versions of the seal used since 1821. The fractional-weight coins have only the modern version of the design, which includes an eagle on a cactus branch as it battles to contain a snake.

All 2018 Proof Silver Mexican Libertad Coins are produced originally by the Mexican Mint. Founded by Spanish conquistadors in 1535, the Mexican Mint is the oldest operating mint in the Western Hemisphere. It currently serves as the sovereign mint of Mexico, and is overseen by the federal government and Banco de Mexico, the nation’s central bank.

If you have any questions, please don’t hesitate to ask. Silver.com customer service associates are available to you at 888-989-7223, online using our live chat service, and via our email address.