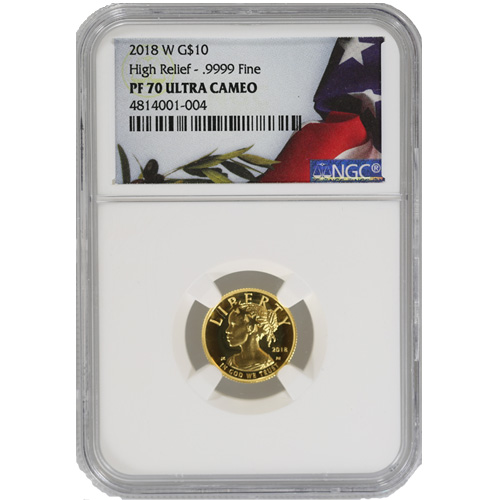 The image of Lady Liberty on American coins has changed with the passage of time. Several different versions of Liberty, from Flowing Hair and Coronet busts to Walking Liberty, have featured on the nation’s coins. Throughout the long history of Liberty designs, one thing has remained a constant. Liberty has always featured as a woman of European-American heritage. In 2017, the US Mint celebrated its 225th anniversary with a groundbreaking new look at Liberty. Now, 2018-W 1/10 oz Proof Gold American Liberty Coins in perfect condition are available to you for purchase online at Silver.com.

From its very founding, the people of the United States have represented a variety of backgrounds. Yet, throughout the nation’s history, the images of female allegories such as Columbia, Justice, and Liberty have been rooted in images from ancient Greek and Roman mythology and reflected the European background of the nation.

Now more than ever, the nation is a multicultural place with people from all walks of life calling themselves Americans. The 2017 Gold Liberty debut introduced the first image of Liberty that took into account America’s diverse heritage. The effigy of Liberty on the coins of the Gold American Liberty Series reflects the African-American heritage of millions of Americans.

The obverse of the 2018-W Proof Gold American Liberty Coin features a left-profile portrait of Liberty as a woman with African-American features. She is shown wearing a crown of massive stars on her head.

On the reverse side of 2018-W 1/10 oz Proof Gold Liberty Coins is a depiction of the bald eagle. In this design, the powerful bird is shown mid-flight as it flaps its wings downward. The designs for this release were created by members of the United States Mint Artistic Infusion Program.

Silver.com customer service is available at 888-989-7223 to answer questions when you buy gold. We are also available online using our live chat and email address features.