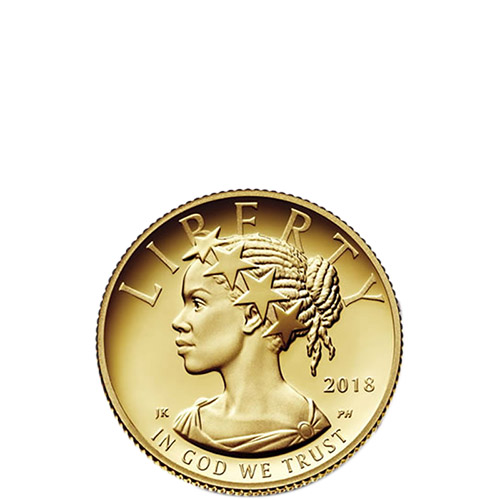 The Gold American Liberty coin series was introduced by the United States Mint in 2017 to celebrate 225 years since the opening of the mint. With the release of these coins, several milestones occurred in the coining of American gold coins. Now this series expands with a new proof option for 2018. Today, 2018-W 1 oz Proof Gold American Liberty Coins are available to you online at Silver.com.

With the release of the first Gold American Liberty coin in 2017, the United States Mint issued just its second-ever $100 (USD) face value 1 oz gold coin. It was also the first time the Mint had featured such a stirring image of Liberty captured in a completely different light than at any point in the last 225 years.

The US Mint celebrates this historic milestone with several new renditions of Liberty upcoming in the years ahead. These 2018-W 1/10 oz Proof Gold American Liberty Coins depict Liberty as an African-American woman in a design from Justin Kunz.

On the obverse of the Proof Gold American Liberty coin is the image of Liberty as an African-American woman. She wears a crown of large stars similar to the one worn by Liberty on the Statue of Freedom. The design is from US Mint Artistic Infusion Program designer Justin Kunz and sculpted by US Mint Sculptor-Engraver Phebe Hemphill, with both artist’s initial featured off Liberty’s shoulders as “JK” and “PH.”

The reverse of the 2018-W 1/10 oz Proof Gold American Liberty Coin bears the image of a powerful American bald eagle in flight. Engravings on this face include the nation of issue, face value, weight, purity, and metal content of the coins. The “W” mint mark of the West Point Mint is found on this face as well.

Please feel free to reach out to Silver.com if you have questions. Our customer service team is available at 888-989-7223, online through our live chat, and via our email address.