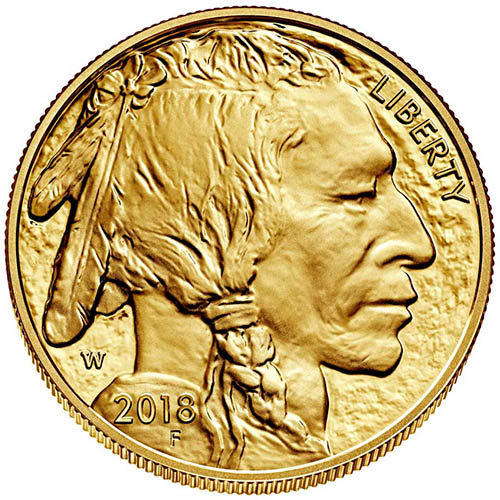 James Earle Fraser was born and raised in Winona, Minnesota, and often followed his father on his work travels. Fraser’s father worked as an engineer for the railroads laying down track across the Plains and Upper Midwest, exposing him to life on the frontier of post-Civil War America. Fraser used his childhood inspiration in the design of the Buffalo Nickel, which was in circulation from 1913 to 1938.

On the obverse of 2018-W 1 oz Proof Gold American Buffalo Coins from the United States Mint is the image of a Native America. This right-profile portrait is said to be a combination of the facial features from three chieftains of the early 20th century: Big Tree, Iron Tail, and Two Moons. Included inscriptions feature “Liberty,” the year of issue “2018,” and the “W” mint mark of the West Point Mint.

The reverse side of 2018 Proof Gold American Buffalo Coin bears the image of an American bison. The buffalo was of vital importance to the existence of Plains tribes in the United States. The buffalo provided everything from hide for housing, fur for clothing, and meat for sustenance.

These 2018-W 1 oz Proof Gold American Buffalo Coins are available to you inside the hardwood display box of the United States Mint and come with an included Certificate of Authenticity.

We encourage our customers to reach out to us on the phone at 888-989-7223. You can also connect with us online through our live web chat and email address. Live gold prices are constantly updated on our website for your convenience!