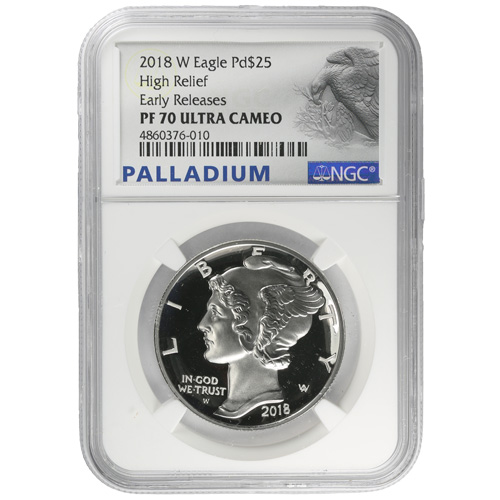 Each of the 2018-W 1 oz Proof Palladium American Eagle Coins in this product listing comes to you with a perfect certification from the NGC. Coins with a PF70 certification exhibit full, original mint luster and have no detracting flaws of any kind. The included Early Release label is available as well and notes that each coin arrived for certification within 30 days of its 2018 release by the United States Mint.

Palladium American Eagle Coins feature obverse and reverse designs from Adolph A. Weinman. A student of Augustus Saint-Gaudens, Weinman is credited with creating two of the nation’s greatest coin designs of all time. His Walking Liberty depiction was on the half-dollar coin from 1916 to 1947, and is today found on the Silver American Eagle. Now, his Winged Liberty design graces a second coin as well.

On the reverse of 2018-W 1 oz Proof Palladium American Eagle coins is another design from Weinman. This one originated on the American Institute of Architect’s Gold Medal issued in 1907. It depicts a bald eagle at rest on a cliff’s edge with a tree branch clutched between its talons.

If you have any questions about the Palladium Eagle, please don’t hesitate to ask. Silver.com customer service is available at 888-989-7223, online using our live chat, and via our email address.