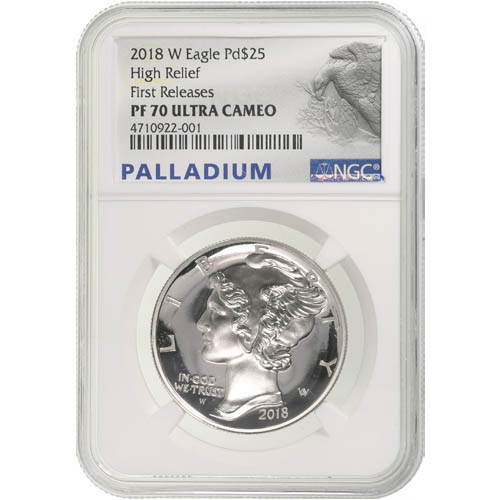 Palladium American Eagles are the first-ever palladium bullion coins issued by the United States Mint and one of the few still available in the world today. Palladium coins have ebbed and flowed in popularity in recent years. Other major programs currently or recently available include the Palladium Canadian Maple Leaf and the Palladium Russian Ballerina.

On the obverse of 2018 Proof Palladium American Eagles is the image of Winged Liberty. This iconic image was designed by Adolph A. Weinman in 1916 for consideration one US coins and was eventually chosen for the US dime. The coin itself became known as the Mercury Dime, rather than its official name of Winged Liberty, because of Liberty’s similar appearance to the Roman messenger god Mercury.

The reverse side of 2018-W 1 oz Proof Palladium American Eagles bears the American bald eagle design also created by Weinman. This design was developed in 1907 and originally featured on the American Institute of Architects’ gold medal.

These 2018-W 1 oz Proof Palladium Eagles are available here today in perfect condition. PF70 coins have full, original mint luster with no detracting flaws present anywhere on the coins. With a UCAM label included, these ultra-cameo products have strong, frosted designs and deeply-mirrored, clear background fields. First Day of Issue labels indicate that these coins were received for grading inside of sealed boxes from the US Mint within 24 hours of the release date in 2018.

Silver.com encourages customers to call us with questions at 888-989-7223. We are also available online through our live chat and email address features.