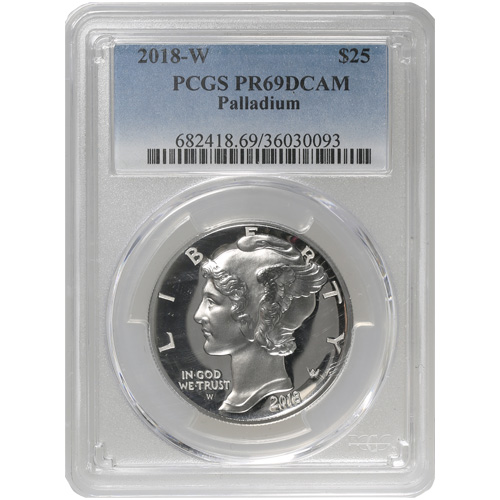 The United States Mint issued the first-ever American palladium bullion coin in 2017 with the investment-grade Palladium American Eagle. This coin offered just a 1 oz bullion option with a mintage of 15,000 in total and all coins sold out for that date mark. In 2018, the United States Mint suspended the bullion version in favor of the 2018 Proof Palladium American Eagle’s first-ever release with a matching mintage of 15,000 coins.

All of these 2018-W 1 oz Proof Palladium American Eagle Coins earned the near-perfect certification of PR69 from the PCGS. Coins in this condition showcase full, original mint luster and a maximum of two minor detracting flaws that include possible minuscule contact marks or hairlines.

With the included deep-cameo, DCAM, label for this coin, you can rest assured of the visual brilliance this coin possesses. Each one features strong, frosted matte elements on the design sets and deeply-mirrored, clear background fields.

The obverse of 2018-W 1 oz Proof Palladium American Eagle Coins includes Adolph A. Weinman’s 1916 design of Lady Liberty for the US dime. Known as the Mercury Dime, this left-profile portrait of Liberty with a winged cap reminded may of the Roman messenger god Mercury.

On the reverse side of 2018 Proof Palladium American Eagles is the design of an American bald eagle. This image was also created by Weinman but was designed in 1907 and originally featured on the American Institute of Architects’ gold medal issued for that year.

All Proof Palladium American Eagles are issued by the United States Mint’s facility at West Point. The West Point Mint’s “W” mint mark appears on the coin on the obverse side to the lower-right design field.

Please don’t hesitate to contact Silver.com if you have any questions. You can call us on the phone at 888-989-7223, chat with us live online, or simply send us an email with your inquiries.