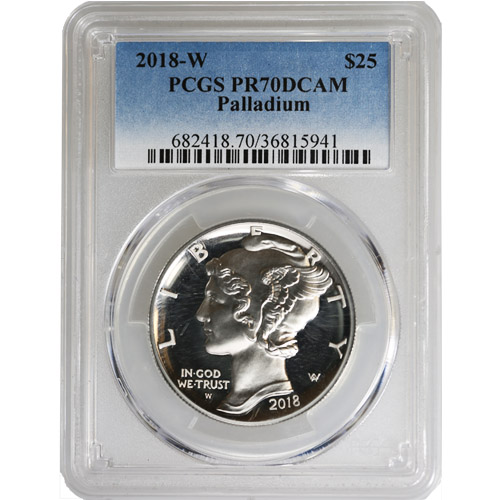 In 2017, the United States Mint gave the Palladium American Eagle its long-awaited debut. Congress authorized the production of a palladium bullion coin in 2010, but the intense demand for gold and silver during this period left the US Mint focused on producing Gold Eagles and Silver Eagles. The first release of Palladium Eagles offered a BU version, while the 2018 release saw the first proof version issued. Today, 2018-W 1 oz Proof Palladium American Eagles in perfect condition are available to you online at Silver.com.

The Palladium American Eagle is unique among the four versions of the American Eagle bullion coins. While the gold and silver coins are available in BU, Proof, and Burnished options, and the Platinum Eagle in BU and Proof, the Palladium Eagle offers only one of these options with each date mark. The 2017 release was a BU coin, while these 2018 coins were issued as Proof specimens. Subsequent strikes in 2019 and 2020 offered a Reverse Proof and Burnished version, respectively.

All of the 2018-W 1 oz Proof Palladium American Eagles in this listing come to you in perfect condition according to the PCGS. Coins with a PR70 grade have full, original mint luster and present with no detracting flaws of any kind. The included DCAM labeling indicates the coins have strong, frosted design elements set against deeply-mirrored, clear background fields.

On the obverse side of 2018-W Proof Palladium American Eagles is an image of Lady Liberty in left-profile relief. Known as the Winged Liberty design, the winged Phrygian cap she wears so reminded Americans of the Roman messenger god Mercury, that Americans took to calling the coin this design appeared on the Mercury Dime instead of the Winged Liberty Dime.

The reverse field of 2018-W 1 oz Proof Palladium Eagles comes with a design created by Adolph A. Weinman in 1907. The same man behind the Winged Liberty design on the obverse, this reverse design was initially created for the American Institute of Architects medal. It features a bald eagle with raised wings clutching a small sapling on the edge of a cliff.

Please contact Silver.com if you have any questions about these coins. Our team can assist you on the phone at 888-989-7223, online using our live chat, and via our email address.