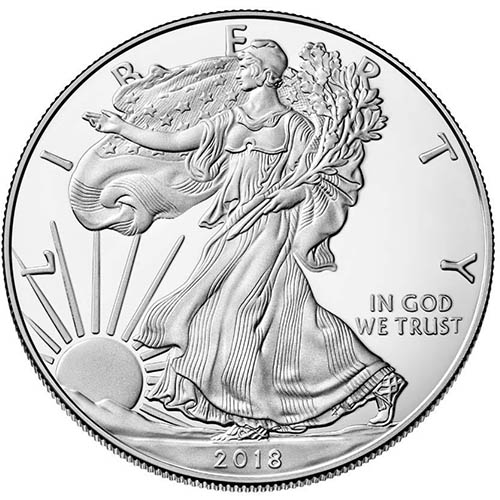 The Silver American Eagle coin is the official silver coin of the United States. First offered in 1986, these coins are available today in three different versions ranging from a bullion and proof coin, to the newer burnished coin. Each Silver Eagle is available with 1 Troy oz of pure silver backed by the federal government. Today, 2018 Proof Silver American Eagle Coins are available to you online at Silver.com.

All Silver American Eagle coins feature the same design from year to year. The US Mint selected iconic designs from American history for use on the nation’s most beautiful silver coins for sale. The official coins of the US, Silver Eagles feature Walking Liberty on one side and the heraldic eagle on the other.

Each 2018 Proof Silver American Eagle listed here is available inside of a United States Mint display box. Each box is produced with blue velvet and has a satin-lined interior for your coin to rest in. The included Certificate of Authenticity verifies your coin’s status as an official 2018 Proof Silver Eagle.

The obverse of 2018 Proof Silver American Eagle coins features the aforementioned Walking Liberty design. Created in 1916 by Adolph A. Weinman, this image depicts Liberty walking toward the setting sun as a symbol of the nation’s march toward an ever-brighter future. It originally featured on the Walking Liberty Half-Dollar from 1916 to 1947.

On the reverse of all Proof Silver American Eagles is John Mercanti’s depiction of the heraldic eagle. Used first on US Mint coins in 1794, this modern version was created in 1986 and features the bald eagle behind the heraldic shield with an olive branch in one talon and the arrows of war in the other.

Please don’t hesitate to contact Silver.com with questions. You can call us at 888-989-7223, chat with us live online, or simply send us an email with your inquiries.