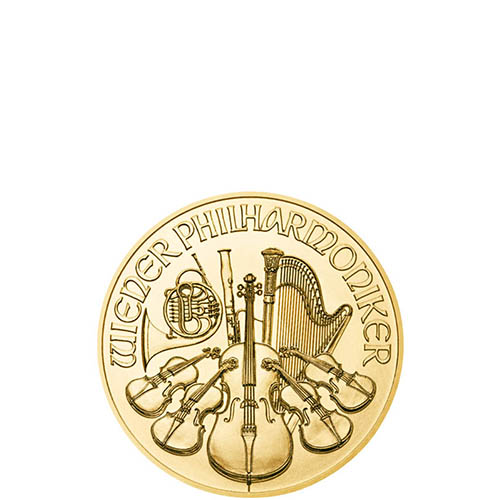 When the Gold Austrian Philharmonic Coins were first introduced as investment-grade gold for sale, the Austrian Mint offered the coins in 1 oz and 1/4 oz weights. The first addition to the program came in the form of the 1/10 oz coin which was introduced in 1991. Today, 2019 1/10 oz Gold Austrian Philharmonic Coins are available to you online at Silver.com.

All 2019 1/10 oz Gold Austrian Philharmonic Coins are available to you in Brilliant Uncirculated condition when you purchase today. The 1/10 oz coin is offered by the Austrian Mint in protective plastic packaging or mint tubes of 20 coins.

Only two coins have ever been removed from the Gold Austrian Philharmonic Series and both were commemorative issues to mark anniversary dates. The famed Big Phil, a 1,000 Troy oz coin with a €100,000 (Euros) face value was issued in 2004 for the program’s 15th anniversary. A 20 oz Gold Philharmonic was issued in 2009 to mark the 20th anniversary of the program and featured a total mintage of 6,027, allowing for 2,009 coins to be distributed in each of the markets of America, Europe, and Japan.

The obverse of all 2019 Gold Austrian Philharmonic Coins features the design of the Great Organ. This massive musical instrument is found in the Golden Concert Hall, the venue for most Vienna Philharmonic Orchestra performances in Austria.

On the reverse of 2019 1/10 oz Gold Austrian Philharmonics is a collection of nine musical instruments. The design field focuses on a cello in the center with two violins on each side. Behind this visual are a horn, flute, bassoon, and harp.