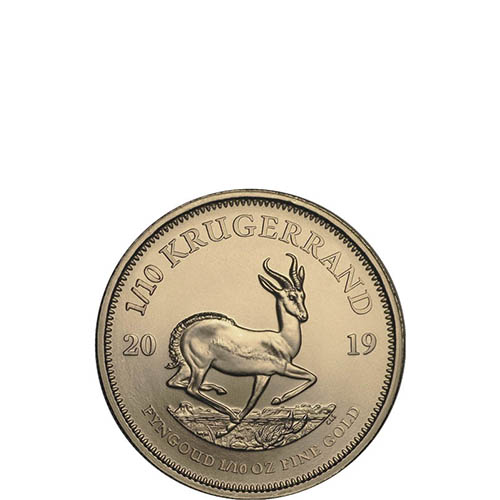 The Gold South African Krugerrand coin was once the best-selling gold coin in the world. Introduced at a time when gold bullion coins as a means of private gold ownership were nonexistent, the Gold Krugerrand dominated the portfolio of investors for nearly two decades before a rash of other gold coin options emerged in the late 1970s and the 1980s. Right now, 2019 1/10 oz Gold South African Krugerrand Coins are available to purchase online at Silver.com.

Each 2019 1/10 oz Gold South African Krugerrand Coin available to you at Silver.com is in Brilliant Uncirculated condition. The coins are available in one of two shipping options, with individual coins housed in protective packaging and multiples of 50 offered in protective mint tubes.

The Gold Krugerrand was issued in 1967 for the first time and available at that time only as a 1 oz gold coin. Following the surging demand for Krugerrands in the 1970s admits a bull market for gold, the South African Mint introduced fractional-weight Gold Krugerrands starting in 1980. The release of fractionals included a 1/2 oz and 1/4 oz coin along with these 1/10 oz Gold South African Krugerrands.

On the obverse side of all Gold South African Krugerrand Coins is the image of Paul Kruger. The first elected President of the South African Republic, Kruger served as president from 1883 to 1901 when he was forced into exile in the Netherlands in Europe. Kruger had been a successful military leader for the Boers during the First Boer War and served as part of a triumvirate that led the nation after initial independence from Great Britain prior to his election as president.

The reverse face of 2019 1/10 oz Gold South African Krugerrand Coins includes the design of the national symbol. A Springbok antelope is depicted on this side in right-profile relief as it skips across the grasslands of South Africa. The coin’s name, weight, and metal content are featured on this side along with the date of issue.

If you have any questions, please don’t hesitate to reach out to Silver.com. Our customer service team is available to you at 888-989-7223, online using our live chat service, and via our email address.