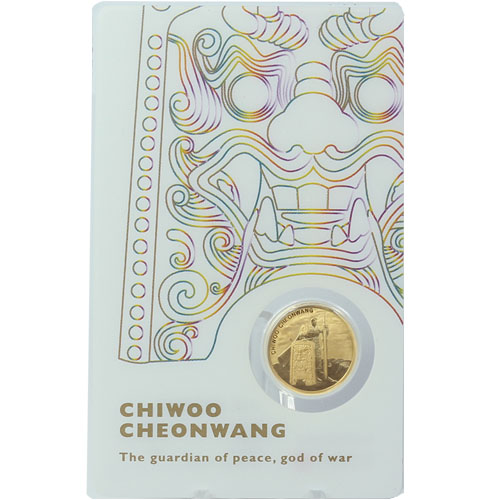 Chiwoo Cheonwang was one of the leading members of one of the three founding tribes of China. His exploits on the field of battle in Ancient China gave rise to mythical attributes and skills credited to his legend. Today, he is remembered as the God of War because of those exploits. Today, 2019 1/10 oz Gold South Korean Chiwoo Cheonwang Medallions are available to you online at Silver.com.

Each of the designs in the Chiwoo Cheonwang Series from KOMSCO offers a new depiction of Chiwoo on the reverse. From 2016 to this release in 2019, the series has so far followed his preparations for battle, his skills in the fight, and now his enjoyment of yet another victory. The 2016 medal depicted him completing his preparation by getting his armor on. The 2017 design focused on a mounted Chiwoo rallying his troops. In 2018, he was depicted riding into the thick of the battle on horseback to slay his enemies. Now, the 2019 design captures his victory pose.

All of the 2019 1/10 oz Gold South Korean Chiwoo Cheonwang Medallions are available to you in this listing in a secure, sealed white assay card with the Certification of Authenticity information that includes weight, purity, and metal content. The assay card has stylized artwork depicting the image from the obverse of the medals. With a total of 5,000 gold medals in the 2019 1/10 oz release, KOMSCO has packaged just 1,250 of those in these white assay cards.

Obverse images on the 2019 1/10 oz Gold South Korean Chiwoo Cheonwang Medallions include the common design of the entire series. Here, the shield of Chiwoo with the face of Do ggae bi is featured. The shield is encircled by inscriptions of the mint of issue, date of issue, weight, purity, metal content, and nation of issue. There is also a latent security image on this face of the medals.

Reverse designs for the 2019 1/10 oz Gold South Korean Chiwoo Cheonwang Medallions show the man himself basking the glow of another victory on the field of battle. He stands with his helmet removed, offering the first glimpse of his human side in the series. His shield rests at his right side while his left hand clutches his massive battle sword while it stands on its tip.

Please feel free to reach out to Silver.com if you have questions when you buy gold. Our customer service team is available at 888-989-7223, online using our live chat, and via our email address.