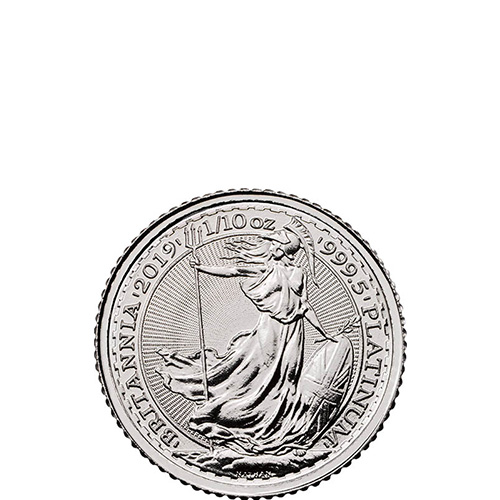 The Royal Mint’s most prominent series of bullion coins is the Britannia collection. An enduring symbol of strength and unity, Britannia takes her name from the Roman name for the province it conquered in the British Isles. Britannia is now viewed as a female personification and exhibits the same steely determination in her appearance as the people she represents. Right now, 2019 1/10 oz Platinum British Britannia Coins are available to purchase online at Silver.com.

Each 2019 1/10 oz Platinum British Britannia coin in this listing is in Brilliant Uncirculated condition. These platinum bullion coins are available to you in individual packaging or two bulk options. You can purchase the Platinum Britannia in mint tubes of 25 coins or in a sealed box of 500 coins that comes with 20 individual mint tubes inside.

The reverse of 2019 1/10 oz Platinum British Britannia Coins includes Philip Nathan’s design of Britannia. Her figure has regularly featured on British currency since the reign of King Charles II, but her first appearance came on coins issued by the Roman Emperor Hadrian following the empire’s conquest of Britain.

Nathan’s design of Britannia is a modern depiction that retains the grace and power of previous imagery. Britannia stands ready to defend the land at the southern coast of England. She wields a trident to exert control over the waters of the English Channel while holding a shield in her left hand, emblazoned with the Union Jack, to fend off any invaders.

On the obverse of all 2019 Platinum British Britannia Coins is the image of Queen Elizabeth II. Her Majesty has featured on British coinage since her ascension to the throne in 1952. This right-profile design is the fifth-generation work of Jody Clark created in 2015 for the Royal Mint.

If you have any questions, please don’t hesitate to contact Silver.com. Our customer service team is available at 888-989-7223, online using our live chat, and via our email address. You can also find platinum prices updated regularly on our site.