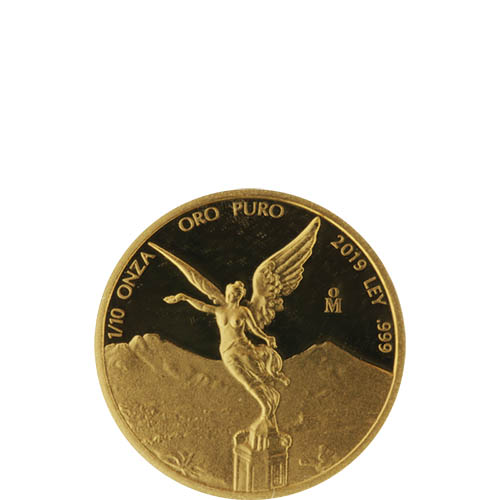 Each of the 2019 1/10 oz Proof Gold Mexican Libertads in this product listing ships with an individual protective plastic capsule only. No presentation boxes or Certificate of Authenticity is available for the coins listed here. These Proof Gold Libertads do have frosted design elements with mirrored background fields.

The obverse of 2019 Proof Gold Mexican Libertads features the statue of Winged Victory as shown atop the Mexican Independence Victory Column in Mexico City. Winged Victory is inspired by the Roman goddess Victory, also known as Nike to the Greeks. She was the goddess of victory and modified for Mexican depictions with a crown wreath and broken chains in one hand.

On the reverse, 2019 1/10 oz Proof Gold Mexican Libertads feature the Mexican coat of arms. This is the modern version of the seal and depicts a golden eagle battling a serpent from its perch on a cactus.

The Mexican Mint was founded in 1535 by Spanish conquistadors and is the oldest of its kind in the Western Hemisphere. It once struck coins for Spanish colonies throughout the West, but now produces bullion, numismatic, and circulating currency for Mexico.

If you have any questions about gold for sale, just call Silver.com. Our customer service team is available at 888-989-7223, or you can connect to us online through our live chat and email features.