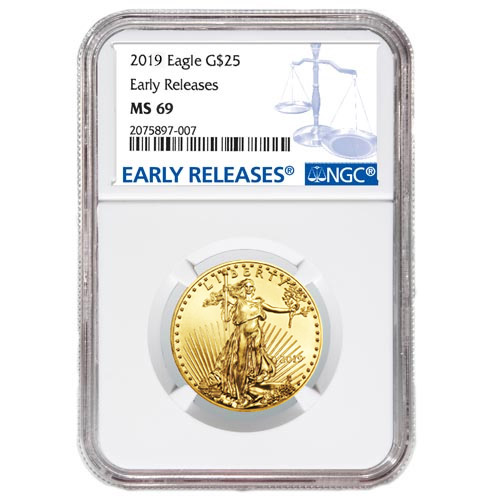 The highest mintage figure ever achieved in the 1/2 oz Gold Eagle option came in its introductory release of 1986. That year, 599,566 coins were issued by the United States Mint. That was the lowest figure among the four coins that year. In more recent issue years, the 1/2 oz Gold American Eagle has had the lowest mintage figures by far. For example, the 2016 release featured 925,000 1/10 oz coins and just 74,000 1/2 oz coins.

On the obverse side of 2019 1/2 oz Gold American Eagle Coins is the image of Lady Liberty. Augustus Saint-Gaudens was commissioned by President Theodore Roosevelt in 1905 to help revitalize the appearance of designs on circulation coinage in the US. Saint-Gaudens designed this image of Liberty to break the mold. No longer featured in Greek- and Roman-inspired designs, her powerful figure is free and walks toward the future with the nation’s capital behind her.

The reverse of 2019 1/2 oz Gold Eagles includes the exclusive design of an American bald eagle family by Miley Busiek. Created in 1986, it features a male eagle in flight over the family nest as a female offers her wing as shelter to a young hatchling.

These 2019 1/2 oz Gold American Eagle Coins are available to purchase with a near-perfect certification from the NGC. Coins in Mint State 69 condition have full, original mint luster and no more than two minor detracting flaws. Acceptable flaws at this grade level include minuscule contact marks or hairlines.

Early Release labels included with your purchase indicate the coins arrived for certification within the first 30 days of the United States Mint releasing its 2019 dated Gold American Eagles.