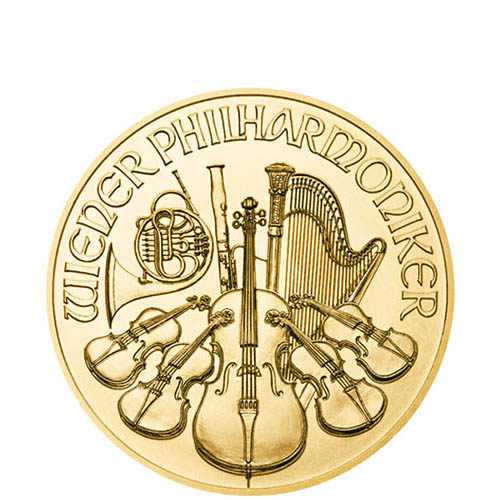 Each of the 2019 1/2 oz Gold Austrian Philharmonic Coins available to purchase here today comes in Brilliant Uncirculated condition. The coins are issued by the Austrian Mint for individual purchase inside of protective packaging or for bulk purchase inside of mint tubes containing 10 coins.

On the obverse of all 2019 1/2 oz Gold Austrian Philharmonic Coins, you’ll find the image of the Great Organ. This is located inside the Golden Concert Hall in Vienna’s Innere Stadt neighborhood. The national capital of Austria, Vienna is home to the cultural gem that is the Vienna Philharmonic Orchestra. Formed in 1842, it has delighted locals and visitors alike for more than 170 years now.

Founded in 1195 by Duke Leopold V, the Austrian Mint is the official sovereign mint of the Republic of Austria. Leopold V founded the mint using 15 tonnes of silver paid to him by England’s Richard the Lionheart (King Richard I) as a ransom for his troops’ safe passage upon returning from the Crusades in the Middle East.

If you have any questions, please don’t hesitate to ask. You can reach out to Silver.com with questions at 888-989-7223, chat with us live online, or send us an email.