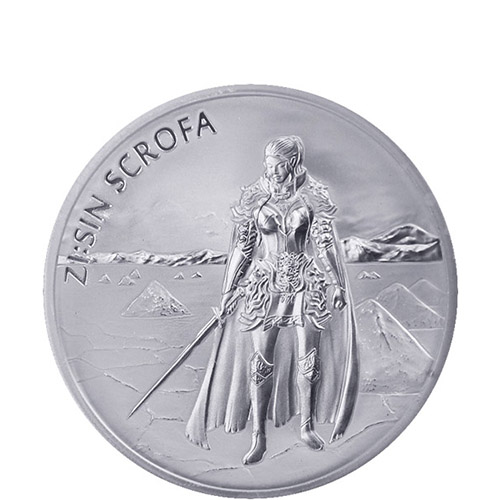 Any quantity available for $4.49 per coin over spot!

For the third release of the Zi:Sin Series, KOMSCO features a design of the Guardian of the Salt Lake. Scrofa, the first female guardian showcased in the collection, is depicted standing guard at her station by the lake that marks the connection point between the mortal human world and the immortal world. From here, she watches for the rise of evil in the world. Now, 2019 1/2 oz Silver South Korean Zi:Sin Scrofa Medals are available to you for purchase online at Silver.com.

The Scrofa release in the Zi:Sin Series has proven to be the most diverse issue of the collection to date. Scrofa’s abilities are reflected in the fact that two different bullion versions of the Scrofa release were developed. In the second, lower-minted option, KOMSCO released what it called a Scrofa Ghost design. This represented Scrofa’s ability to duplicate herself in battle as a means of confusing her enemies.

In this main release, Scrofa is shown standing guard over her responsible zone of the world. Each of the 12 Guardians depicted in the Zi:Sin Series is responsible for guarding the world against evil and watching the 12 directions. In this way, the guardians are aware and alert when evil rises up and can take up their positions leading God’s armies in battle.

On the obverse side of the 2019 1/2 oz Silver South Korean Zi:Sin Scrofa Medal is a depiction of Do ggae bi. This hobgoblin-like figure is said to have the power to ward off evil spirits with its grotesque appearance. Do ggae bi is shown here as he appeared on the shield of Chiwoo Cheonwang. The large shield has a cutout at the bottom in which KOMSCO has placed its latent security image in the design element.

The reverse face of 2019 1/2 oz Silver South Korean Zi:Sin Scrofa Medals includes the image of the female guardian. One of the 12 Guardians, she watches over the Salt Lake. This is the place where the mortal and immortal worlds collide and it is her job to keep a sharp eye out for the rise of evil. In addition to her ability to duplicate herself in battle, she has the power of foresight and can detect threats over great distances.

These 2019 1/2 oz Silver South Korean Zi:Sin Scrofa Medals are available to you for purchase in Brilliant Uncirculated condition. The medals are housed individually inside of protective plastic capsules.

Silver.com customer service is available to you at 888-989-7223 to answer your questions when you buy silver. You can also chat with us live online or email us directly.