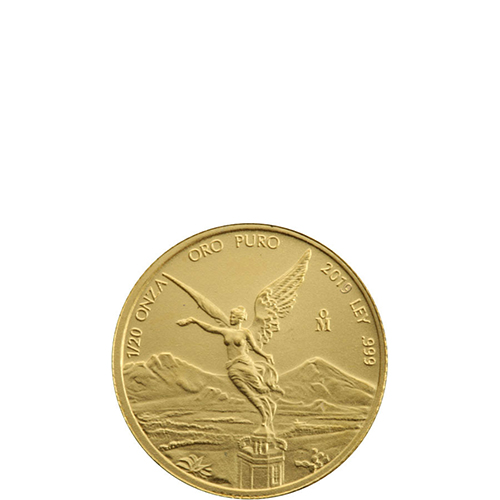 Each 2019 1/20 oz Gold Mexican Libertad Coin in this listing at Silver.com comes in Brilliant Uncirculated condition and is available with protective plastic packaging. Banco de Mexico offers these coins as struck by the Mexican Mint and it is currently the most popular coin in the series. The most recent mintage of 2,500 coins in 2018 was the highest in series that year.

The second-highest mintage figure in the Gold Mexican Libertad Series following the 1991 introduction of the coins as an annual release came from the 1/20 oz Gold Libertad in 1992 when 65,225 coins were struck. The highest mintage recorded among the five coins since 1991 was the 1993 1 oz coin with 73,881 coins.

On the obverse of 2019 1/20 oz Gold Mexican Libertad Coins is the design of Winged Victory. This is based on her figure as featured on top of the Mexican Independence Victory Column that was erected in 1921 in Mexico City to mark the 100th anniversary of the nation’s independence. Winged Victory made her debut on gold coins that year on the obverse of the gold Centenario.

The reverse of 2019 1/20 oz Gold Libertads includes the design of the modern coat of arms for Mexico. The symbol includes the bald eagle as it rests on the arm of a cactus and battles against the slithering, suffocating grip of a snake. The eagle in this designs represents the Mexican people in their struggle for freedom against Spain in the 19th century, the latter of which is represented by the snake.

Gold Libertad coins are struck by the Mexican Mint. Located in Mexico City, the Mexican Mint is the official sovereign mint of the nation and is controlled by the federal government and overseen by Banco de Mexico.

If you have any questions, please don’t hesitate to reach out to Silver.com. You can call us at 888-989-7223, chat with us live online, or via our email address. Don’t forget to check the price of gold per ounce on our website daily!

Images shown are examples only. Actual item appearance is subject to change, but will always correlate with title and descrip