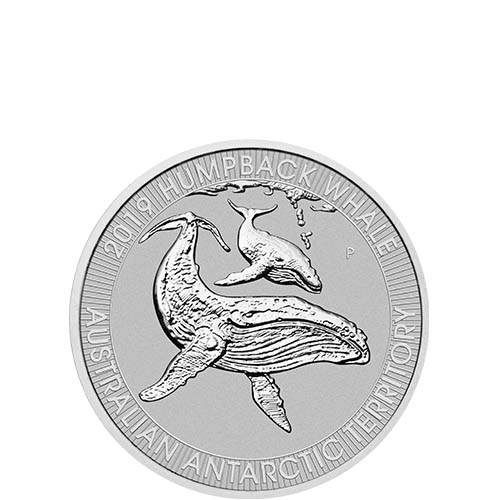 The humpback whale is one of the largest animals on Earth today, and fortunately for its body, it doesn’t have to walk on land. The humpback whale resides in both polar waters and tropical waters around the globe with an estimated population around 80,000. Humpback whales are the latest creatures to showcase on platinum coins from the Perth Mint. Today, 2019 1/3 oz Platinum Australian Humpback Whale Coins are available to you online at Silver.com.

Humpback whales average 39 to 52 feet in length and can weigh as much as 30 metric tons. Though massive in their own right, the humpback whale is actually much smaller than the world’s largest animal. Blue whales can weigh an average of 150 metric tons, dwarfing the weight of the average humpback.

All 2019 1/3 oz Platinum Australian Humpback Whale coins are available to you in Brilliant Uncirculated condition. The coins are housed inside of protective acrylic tubes and come with “P” mint marks on the reverse side from the Perth Mint.

On the reverse of 2019 1/3 oz Platinum Humpback Whale Coins is the image of a mother and her calf just below the surface of the ocean as they swim. Engravings around the design field include “2019 Humpback Whale” and “Australian Antarctic Territory.”

The humpback whale travels more than 16,000 miles each year as it traverses the globe from its feeding grounds in the polar regions to its breeding and birthing grounds in tropical and subtropical climates. The diet of a humpback whale consists largely of krill and small fish. When the whales leave polar waters, they fast and live off their fat reserves during the birthing season.

For the obverse of 2019 1/3 oz Platinum Australian Humpback Whale, the Perth Mint introduces its new sixth design of Queen Elizabeth II. Her Majesty is depicted here in a right-profile portrait based on Jody Clark’s fifth-generation design for British coins. The image is the first on an Australian coin since the 1960s to show the Queen’s neckline and shoulders.

Please don’t hesitate to reach out to Silver.com customer service. You can call our team members on the phone at 888-989-7223, chat with us live online, or simply send us an email. You can also check platinum prices on our website!