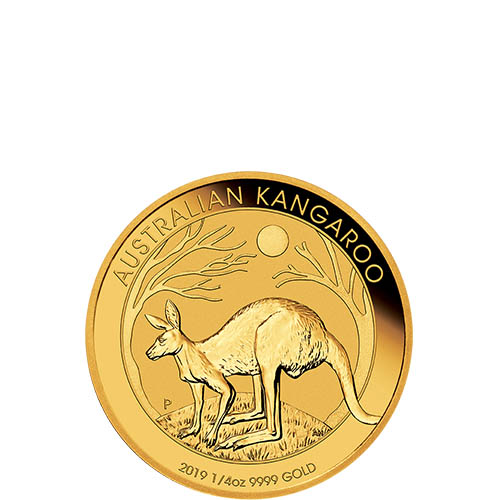 The kangaroo is one of a handful of endemic species found only on the Australian continent or some of the neighboring island nations of the South Pacific. An official symbol of the Commonwealth of Australia, the kangaroo is a beloved creature and easily identifiable by outsiders. Today, 2019 1/4 oz Gold Australian Kangaroo Coins are available to you online at Silver.com.

Kangaroos are separated into four different subspecies. The red kangaroo is the largest surviving member of the entire marsupial family anywhere in the world. The eastern grey kangaroo is the most commonly seen, but less well known than the red. Western grey kangaroos are smaller than their eastern and red cousins. The antilopine is similar to the western and eastern, but is found in the far-northern ranges of Australia.

All of these 2019 1/4 oz Gold Australian Kangaroo Coins are available to you in protective plastic capsules from the Perth Mint. Each coin comes in Brilliant Uncirculated condition and the 1/4 oz weight has a set mintage cap for the 2019 year of 150,000 coins in total. This has been the mintage limit for this weight dating back to 1993.

On the obverse of 2019 1/4 oz Gold Australian Kangaroo Coins is the effigy of Queen Elizabeth II. The sixth design of the Queen to feature on Australian coins since 1953, this is the fifth-generation British design from the Royal Mint’s Jody Clark. Introduced in England in 2016, the design comes to Australian bullion coinage in 2019. This design is the first of the Queen since the 1960s to feature her neckline and shoulders in the design field.

The reverse of all 2019 Gold Australian Kangaroo Coins features the image of a single red kangaroo. This figure is captured in left-profile relief and is depicted on a mound of dirt with a stylized background. This background includes curved trees that match the shape of the design field’s edge and there is a sun rising into the sky in the background as well.

The Perth Mint opened in 1899 as the third and final Royal Mint facility. The only remaining facility open today, it is owned and operated by the government of Western Australia separate of the federal facility, the Royal Australian Mint.

Please feel free to contact Silver.com about our gold for sale. You can call us at 888-989-7223, chat with us live online, or simply send us an email with your inquiries.