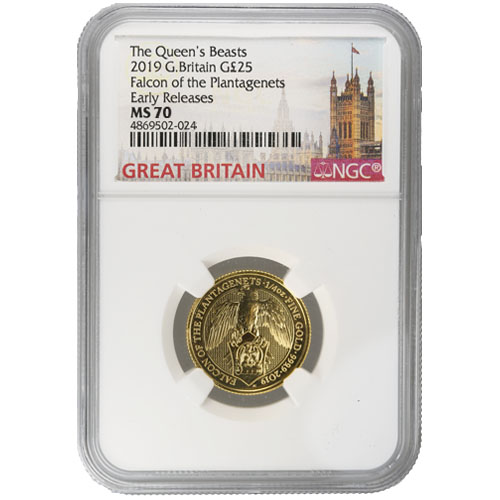 Each of the 2019 1/4 oz Gold British Queen’s Beast Falcon of the Plantagenets Coins in this listing is in perfect condition. Coins with a Mint State 70 certification from the NGC exhibit full, original mint luster with no detracting flaws of any kind. The included Early Release label means the coins were received by the NGC for certification within the first 30 days of the release date set for the coins by the Royal Mint.

The House of Plantagenet held the English throne for more than 300 years. The first King of England from this line was Henry II who ascended to the throne and ruled for 35 years until his death. The final King of England from the House of Plantagenet was Richard III who ruled for just two years and was killed in battle at Bosworth Field in the decisive battle in the Wars of the Roses.

On the reverse of 2019 1/4 oz Gold British Queen’s Beast Falcon Coins is the image of a White Falcon supporting the shield and royal arms of Edward III. The shield includes a white falcon upon it that is clutching a fetterlock. The open fetterlock is a symbol of a legitimate claim to the throne of England.

The obverse of 2019 1/4 oz Gold British Queen’s Beast Coins features the image of Queen Elizabeth II. Her Majesty is depicted here in right-profile relief in a fifth-generation design created in July 2015 by Jody Clark. This latest effigy of the Queen debuted on British coinage starting with 2016 date marks.

If you have any questions, please feel free to contact Silver.com. Our customer service team is available to you at 888-989-7223, online using our live chat and, via our email address.