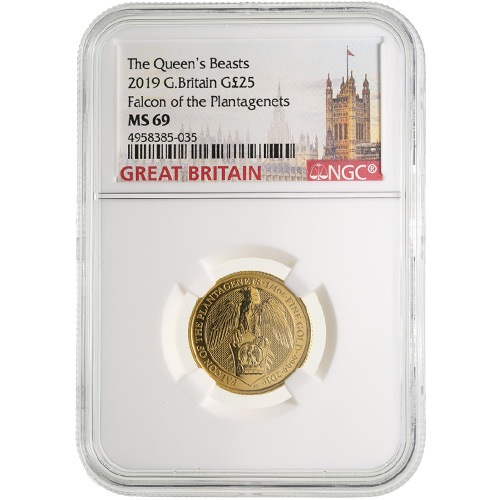 The Falcon of the Plantagenets was one of the most popular Royal Arms of England carried by monarchs from the House of Plantagenet. Adopted by King Edward III during the 14th century, the White Falcon symbol remained a popular one with rulers up until the early 17th-century reign of Queen Elizabeth I. Right now, 2019 1/4 oz Gold British Queen’s Beast Falcon of the Plantagenets Coins are available to purchase online at Silver.com in near-perfect condition.

Each 2019 1/4 oz Gold British Queen’s Beast Falcon of the Plantagenets Coin comes to you with a near-perfect certification from the NGC. Coins with a Mint State 69 certification exhibit full, original mint luster with a maximum of two minor detracting flaws. Examples of acceptable flaws at this grade are limited to minuscule contact marks and hairlines found only outside of the primary focal points of the gold coin.

King Edward III reigned for 50 years in the mid-1300s and is remembered for restoring royal authority in the realm and success on the battlefield. Early in his reign, he enjoyed success against the Scots and in continental Europe against French armies. His reign also marked the start of the devastating Hundred Years’ War with France.

The reverse of 2019 1/4 oz Gold British Queen’s Beast Falcon of the Plantagenets Coins includes the White Falcon symbol used by Edward III. His love of hawking and falconry led him to select the white falcon as his personal seal, and he often employed it on a shield with the bird clutching an open fetterlock in its talons.

On the obverse of 2019 Gold British Queen’s Beast Falcon Coins is the right-profile bust of Queen Elizabeth II. Her Majesty is featured here in a fifth-generation design created in 2015 by Jody Clark for the Royal Mint. The Queen wears the Royal Diadem crown on her head and is seen at the age of 89 in this design.

Design: Falcon of the Plantagenets