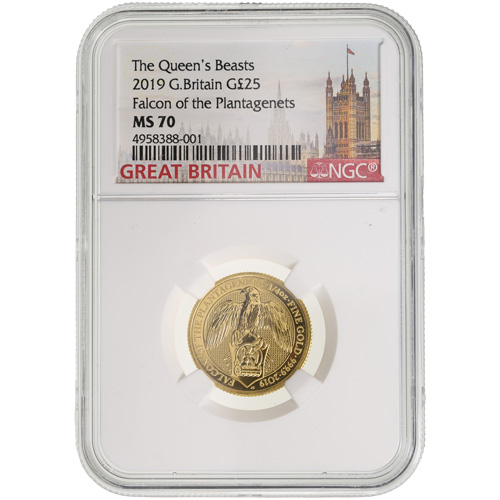 The Royal Mint offers beautiful gold coins for sale in the Queen’s Beast Series. Introduced in 2016, the collection features 10 designs in all chosen from the sculptures of heraldic beasts present at the 1953 coronation ceremony for Queen Elizabeth II. Today, 2019 1/4 oz Gold British Queen’s Beast Falcon of the Plantagenets Coins are available to you online at Silver.com with a perfect certification.

The Queen’s Beast Series is based on sculptures of important heraldic beasts in the Royal Arms of England passed down to Queen Elizabeth II by previous monarchs. The White Falcon comes from the reign of the Plantagenet King Edward III. Edward III ruled for 50 years in the 1300s and enjoyed the second-longest reign in Medieval England.

All 2019 1/4 oz Gold British Queen’s Beast Falcon of the Plantagenets Coins are available to you in perfect condition from the NGC. Coins with a Mint State 70 certification showcase full, original mint luster with no detracting flaws of any kind visible on the surface areas or design elements.

On the obverse of 2019 Gold British Queen’s Beast Falcon of the Plantagenets Coin is Queen Elizabeth II. Her Majesty features here in a right-profile portrait known as the fifth-generation design. It was created in 2015 by Jody Clark and shows the Queen at age 89 wearing the Royal Diadem crown.

The reverse side of 2019 1/4 oz Gold Falcon of the Plantagenets Coins displays the White Falcon symbol. The design here features a white falcon supporting the shield, with Edward III’s personal seal of a white falcon on a shield clutching an open fetterlock in its talons.

Edward III came from the House of Plantagenet, a ruling dynasty that held the crown of England for more than 330 years. The dynasty started with King Henry II in 1154 and ended with the battlefield defeat of King Richard III in 1485 during the Wars of the Roses.

Please don’t hesitate to reach out to Silver.com with your questions. You can call us at 888-989-7223, chat with us live online, or email us directly.

Design: Falcon of the Plantagenets