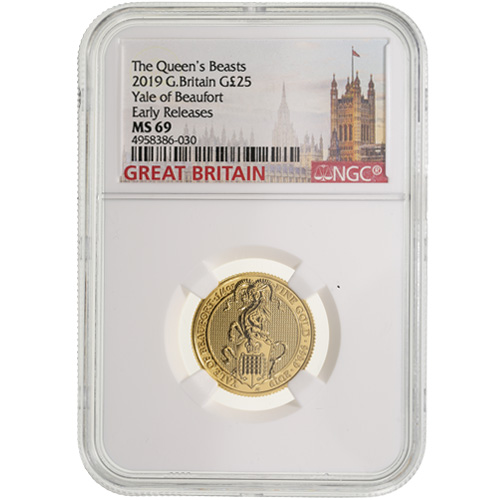 The heraldic beasts featured in British heraldry run the gauntlet from real-world animals to the mythical. The Queen’s Beast Series features a total of 10 different heraldic beasts from British history, with four of those creatures inspired by mythology. The Yale of Beaufort is the most recent of those to feature in this collection. The 2019 1/4 oz Gold British Queen’s Beast Yale of Beaufort Coin is now available to you for purchase online at Silver.com in near-perfect condition.

The Yale is a mythical beast recorded in early writings as a goat- or antelope-like beast. It is often depicted with the tusks of a boar on its snout and horns on its head. The Yale is a versatile symbol in heraldry that can be used to portray grace and elegance, or used to symbolize strength and determination.

Gold for sale in this Silver.com listing bears the Yale of Beaufort design originating with Lady Margaret Beaufort. She was the only heiress of John Beaufort, Duke of Somerset. Married four times, her second marriage to Edmund Tudor resulted in a son named Henry who would go on to defeat King Richard III in 1485 to end the Wars of the Roses and establish the House of Tudor as England’s ruling dynasty.

The reverse of 2019 1/4 oz Gold British Queen’s Beast Yale of Beaufort Coins includes the image of a Yale behind the heraldic shield of Lady Margaret Beaufort. Her shield features her personal arms with the original design included white and blue quarters. The Yale in this design has longer, winding horns than other depictions.

On the obverse of 2019 Gold British Queen’s Beast Coins is Queen Elizabeth II. Her Majesty is the longest-ruling monarch in British history and this right-profile portrait is the fifth in her long reign as Queen of England.

These 2019 1/4 oz Gold Yale of Beaufort Coins earned Mint State 69 grades from the NGC. The coins feature full, original mint luster with a maximum of two minor detracting flaws. Those flaws are limited in nature to minuscule contact marks or hairlines, and limited in scope to those areas outside the primary focal points.

An included Early Release label indicates the coins arrived at the NGC for grading within the first 30 days of their release by the Royal Mint.