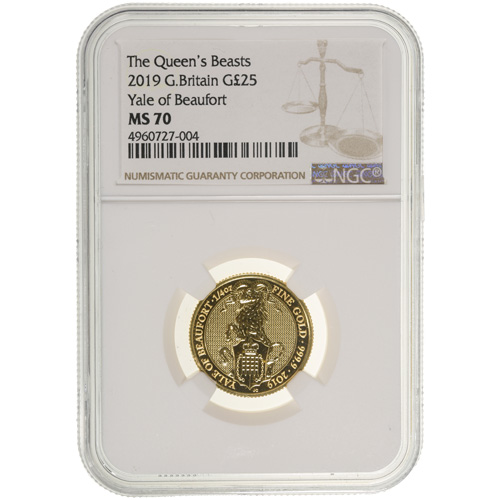 The gold for sale in the Queen’s Beast Series from the Royal Mint includes a variety of bullion and proof options. The proof series offers collectors four weights to choose from, while the bullion range has 1/4 oz and 1 oz coins. The 2019 1/4 oz Gold British Queen’s Beast Yale of Beaufort Coin is currently available to you for purchase online at Silver.com in perfect condition.

The Queen’s Beast Series features 10 different designs, each one representing a different heraldic beast in the British Royal Arms. These beasts were represented as sculptures at the 1953 coronation ceremony at Westminster Abbey for Queen Elizabeth II. The heraldic beasts in this series reflect creatures used by various monarchs dating back through 900 years of British history.

As for the Yale of Beaufort, it comes to the Queen through the Tudor dynasty that reigned England from 1485 to 1603. The founder of the House of Tudor was King Henry VII. His defeat of King Richard III at the Battle of Bosworth in 1485 ended the Wars of the Roses and the rule of the House of York. He brought with him to the crown a badge from his mother’s shield. His mother was Lady Margaret Beaufort.

On the reverse of 2019 1/4 oz Gold British Queen’s Beast Yale of Beaufort coins is the image of Lady Margaret Beaufort’s full shield and beast design. A large Yale, a mythical beast with the body of a goat or antelope, is depicted supporting the shield from behind. The shield itself features a crown above a portcullis, the latter feature being used by King Henry VII in his personal badge.

The obverse of 2019 Gold British Queen’s Beast Yale of Beaufort Coins includes the effigy of Queen Elizabeth II. Her Majesty is depicted here in right-profile relief in a fifth-generation design that was created in 2015 by Jody Clark for the Royal Mint. The background field includes a guilloche design element.