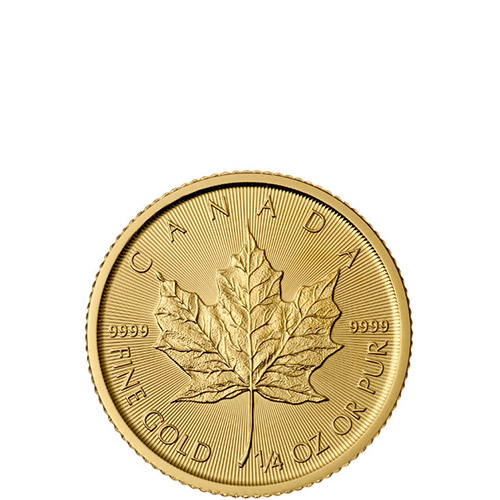 November 1982 was a significant time period for the Royal Canadian Mint’s Gold Canadian Maple Leaf coin. It’s hard to select which event was more significant, but two major things occurred at this time. The Royal Canadian Mint initially introduced the 1 oz coin as a .999 fine gold coin and in November 1982 boosted that purity to .9999 fine gold. Also at this time, RCM introduced the 1/4 and 1/10 oz coins.

All 2019 1/4 oz Gold Canadian Maple Leaf Coins in this listing are available to you inside of protective individual packages. The coins are also available for sale inside of sealed plastic sheets containing 20 coins. All coins in this listing are available in Brilliant Uncirculated condition and feature the radial lines found on the obverse and reverse of all Maple Leaf coins since 2015.

On the reverse of 2019 Gold Canadian Maple Leaf is the design of a sugar maple leaf. The first French-Canadian settlers in the nation used the sugar maple leaf as a symbol of pride and statehood as early as the mid-18th century. Today, the maple leaf is a national symbol used by sports franchises, military units, and even the nation’s flag.

The obverse of 2019 1/4 oz Gold Canadian Maple Leaf Coins features the effigy of Queen Elizabeth II. Her Majesty has featured on Canadian coinage since 1953. This particular design is the fourth-generation effigy of the Queen and marks the first design on a Canadian coin since her father George VI’s effigy to depict the monarch without a crown.

Please feel free to reach out to Silver.com with questions when buying gold. You can call our customer service team at 888-989-7223, chat with us live online, or simply send us an email with your inquiries.